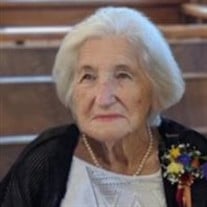 FAITHORN- Bethel June Carlson, age 93 of Faithorn, passed away peacefully at her home in Faithorn on October 6, 2020 surrounded by her family. She was born in Faithorn, on June 5, 1927, the daughter of the late George and Grace (Salzeider) Reid and lived almost her entire life in Faithorn. Bethel graduated from Norway High School in 1945 and attended Northern State Normal School in Marquette, Michigan for teacher training. She initially taught in a one room school house in Banat, Michigan, then was a substitute teacher in the area for a number of years. Later, Bethel was a Head Start teacher for the Dickinson-Iron County Intermediate School District for 13 years. She married Stanley “Slip” Carlson at the Faithorn Methodist Church on December 28, 1948. They raised eight daughters, first in Vulcan, and then moved to a farm in Faithorn in 1963. He preceded her in death on March 15, 2018. Bethel loved cooking, baking, gardening, canning and freezing the fruits and vegetables from their large garden on the beloved Carlson Farm. After retirement, they enjoyed traveling the U.S., making their last cross-country trip in 2015, visiting family and friends in Iowa, Arizona, California, and Wyoming. She was an active member of the Faithorn United Methodist Church, and a fixture at the church harvest suppers and holiday church auctions. Bethel was an Honorary Life Member of the American Legion Auxiliary and a Life Member of the Order of the Eastern Star of Norway, MI. Bethel’s life was centered on caring for and loving her husband, daughters, grandchildren and great grandchildren. She was the storybook grandmother, always with a baby or child on her lap, reading them a book, and a cookie jar full of home baked cookies. Bethel will be remembered as a beloved mother and mother-in-law, grandmother, sister, aunt, and friend who gave unconditional love to those around her and received much love in return. Bethel is survived by her eight daughters: Amy (John) Brendemihl, Grace (David) Gorringe, Mary Beth Carlson, Nancy Carlson, Lorraine (Tony) King, Martha (Alan Yoshimura) Carlson, Dee Dee (Jim) Keller, and Trudy (Michael) Stachowiak, grandchildren and great grandchildren, sisters Lorraine Kelly and Norma Fernhaber, sister-in-law Vida Peters, and many dear nieces, nephews, extended family members and friends. Bethel was preceded in death by her sister Janice Reid Niemi, and brothers Douglas Reid and Laurence Reid. Private family services will be held with interment at the Riverside Cemetery in Faithorn. We are blessed for the gift of Bethel’s life and the many years we shared with her. Family requests memorial contributions may be made to the Faithorn United Methodist Church or the American Diabetes Association.

FAITHORN- Bethel June Carlson, age 93 of Faithorn, passed away peacefully at her home in Faithorn on October 6, 2020 surrounded by her family. She was born in Faithorn, on June 5, 1927, the daughter of the late George and Grace (Salzeider)... View Obituary & Service Information

The family of Bethel Carlson created this Life Tributes page to make it easy to share your memories.

Send flowers to the Carlson family.