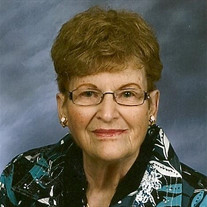 NORWAY- Beverly A. (Reiten) Marchetti, age 85, of Norway, went home to be with her Lord at Evergreen Heights Assisted Living in Kingsford, on December 5, 2016. She was born on April 10, 1931 at the home of her parents, the late Herman and Elizabeth (Lindquist) Reiten in Kingsford. She was raised in Kingsford and graduated from Kingsford High School in 1949. In her youth she was an excellent swimmer and was chosen to attend the Red Cross Water Safety Facility in Whitehall, MI. For two years she taught water safety and lifeguards and worked as a lifeguard during the summer. She was also employed by Red Owl Stores, and a part-time employee at DeRidder's Supermarket. She worked for many years as a paraprofessional at Norway-Vulcan Area Schools. On September 1, 1951 she married the love of her life, Bill Marchetti at St. Barbara's Church in Vulcan, MI. They celebrated fifty years of marriage before his death in 2002. While raising her family she became an excellent seamstress, sewing most of her daughter's clothes. She enjoyed swimming, going to camp with her family, playing horse shoes, playing cards and bowling. She was very proud to be named to the Tri-County Bowling Hall of Fame in 2000. She was a former member of Anderson Hospital Auxiliary, Jake Menghini Museum Auxiliary, Women's Victory Bowling League, and St. Barbara's Church where she had been a Lector and Eucharistic Minister since 1979. Bev is survived by her two sons, Bill (Beth) Marchetti of Norway, and Mark (Sharon) Marchetti of Norway Township, and four daughters, Gina (Pat Boivin) Marchetti of Pembine, Lisa (Buck) Becker of Vulcan, Diane Bray of Norway, and Maria (Gary) Gardipee of Foster City; seven grandchildren, Mike Styberski of Norway, Sarah (Josh) Cowen of Madison, WI, Brenda (Jeff) Gurchinoff of Kingsford, Dana (Kurt Paquin) Blichmann of Gwinn, Alissa (Dave) Johnson of L'Anse, Jordan (Brooke Sanford) Marchetti of Florence, WI, Mariah (Paul Yakowenko) Marchetti, of Iron Mountain; one great-grandson, Evan Marchetti of Norway; a sister, Margaret Marcolini of Venice, FL; and many nieces and nephews. Besides her husband, Bill, she was preceded in death by her parents; a sister June Santoni; a brother Francis (Skitz) Reiten and her son-in-law Kim Bray. Family will greet friends on Monday, December 12 from 8-10 a.m. at St. Barbara’s Church in Vulcan. A Memorial Mass will be celebrated on Monday at 10 a.m. at St. Barbara’s Church with Fr. Timothy Ekaitis officiating. Interment will be held at the Norway Township Cemetery in the spring. Family request memorial contributions may be made to the American Heart Association or St. Barbara’s Church Restoration Fund.

NORWAY- Beverly A. (Reiten) Marchetti, age 85, of Norway, went home to be with her Lord at Evergreen Heights Assisted Living in Kingsford, on December 5, 2016. She was born on April 10, 1931 at the home of her parents, the late Herman and Elizabeth... View Obituary & Service Information

The family of Beverly Ann Marchetti created this Life Tributes page to make it easy to share your memories.

Send flowers to the Marchetti family.