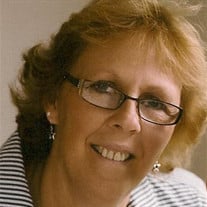 NORWAY- Candace “Candy” Thomas age 61 of Norway, died Monday, September 26, 2016 at her home, surrounded by her family. She was born on July 4, 1955 in Norway the daughter of Donald and Shirlee (Ross) Johnson. Candy graduated from Norway High School in 1974. She married Dale Thomas on June 18, 1977 in Grace United Methodist Church in Norway. Candy loved working at the Norway Pharmacy/TDS for over 20 years, played in the Norway City Band for over 46 years, and was secretary/treasurer. She belonged to her Card Club for 35 years. She was a member of Grace United Methodist Church and was church secretary since 1990. Candy was a diehard Lions Fan! She loved camping and traveling with her husband, enjoyed arts and crafts and since she was born on the 4th of July, she loved everything patriotic. She was a devoted wife, daughter, sister, godmother and auntie. However, her greatest joy was her role as a mom. Candy is survived by her husband of 39 years Dale; son Jordon (Keeley Pendy) Thomas of Bloomfield Hills; parents Don and Shirlee Johnson of Norway; brother David (Carol) Johnson of Marinette, WI; sister Wendy (Doyle) Yoder of Norway; sister-in-law Kathy Thomas of Minneapolis, MN; nieces Julie (Scott) Williams of Marinette, WI and Amanda Yoder of Spread Eagle; nephews Dan Johnson of Green Bay, WI, Harley (Nikki) Miller of Kalamazoo, Jake (Scott Baccus) Miller of Littleton, CO, Abe (Ruthie) Yoder of Kingsford, and Dan (Jen) Thomas of Minneapolis, MN; special friends John and Cathy Groeneveld and their daughters Adria and Elleda. She was preceded in death by her mother and father-in-law Marvin and Pat Thomas; step-father-in-law Howard Williams; and brother-in-law Dick Thomas. Family will greet friends on Friday, September 30 from 10-11 a.m. at Grace United Methodist Church in Norway. A Memorial Service will be held on Friday at 11 a.m. at Grace United Methodist Church, Pastor Irene White officiating. A luncheon will be provided at the church following the service.

The family of Candace Ross Thomas created this Life Tributes page to make it easy to share your memories.

Send flowers to the Thomas family.