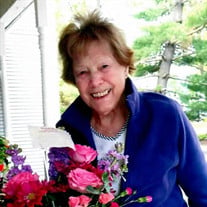 VULCAN- Cecilia O. Tojza age 92 of Vulcan, died Wednesday, September 19, 2018 at St. Catherine’s Hospital in Pleasant Prairie, WI. She was born on December 4, 1925 in Crystal Falls, the daughter of the late Joseph and Theolinda (Zaupa) Cazzola. Cecilia married Roman Tojza on May 15, 1948 in Chicago, IL. Together they built their retirement home in Vulcan in 1982. Roman preceded her in death on January 19, 1989. She worked outside the home most of her life doing various jobs, worked as a seamstress for an athletic company the longest. She retired in 1986 after 20 years. Cecilia enjoyed her family, following the news, gardening, flowers, walking and was an avid shopper, who learned to drive and received her drivers license at the age of 62. In her early days, Ceil and Roman were avid travelers to various countries. Cecilia is survived by her sons Thomas (Pamela) Tojza of Long Grove, IL and Robert (Violet) Tojza of Trevor, WI; daughter Teresa (Bradley) Dillon of Silver Lake, WI; grandchildren Melissa (Richard) Pulido, Jeremy (JoAnna) Tojza, Brian (Michelle) Dillon, Kyle Dillon and Sara Dillon; great grandchildren Tyler, Bella, Ava and Rylan; brothers Robert and Alfred Cazzola of Waucedah; sister Bruna Norman of Elderon, WI; and several nieces and nephews. She was preceded in death by her brothers Gino, Severino, Raymond, Louis and Olinto Cazzola; and her sisters Dora Lovato and Norma Gates. Visitation will be held on Friday, September 28 from 9:30-11:30 a.m. at St. Mary’s Church in Norway. The Mass of Christian Burial will be held on Friday at 11:30 a.m. at St. Mary’s Church with Fr. Timothy Ekaitis officiating. Interment will follow at the Norway Township Cemetery.

The family of Cecilia Olivia Tojza created this Life Tributes page to make it easy to share your memories.

Send flowers to the Tojza family.