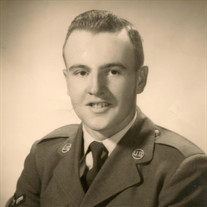 NORWAY- Charles “Charlie” L. Pellegrini, 81, of Norway, passed away, surrounded by family on Monday, November 28, 2016 at Dickinson County Healthcare System in Iron Mountain. He was born on April 9, 1935 in Norway, son of the late Louis and Esther (Cologna) Pellegrini. Charlie married Terese Neveau, of Niagara, on June 23, 1962 at St. Mary’s Catholic Church in Norway. He grew up on the family farm in Norway and developed a strong work ethic, and graduated from Vulcan High School in 1953. Charlie served his country and enlisted in the United States Air Force in 1954 and served in the Strategic Air Command. He was honorably discharged in 1958 and recently had the privilege of going on the UP Honor Flight to Washington, D.C. with his son Chuck. He was employed at the Niagara Paper Mill for 40 years. He also drove school bus for his father and his brother Roger for many years. During his retirement he could be found helping his brother Roger at the Pellegrini farm in Vulcan. Charlie enjoyed reading, walking his dogs, was an avid cross-country skier and a big fan of the Green Bay Packers. He spent many hours in his garden and enjoyed sharing produce with his friends and family. Charlie was always meticulous in the care of his vehicles, especially his Ford truck “Big Red”, and spent time each week going to breakfast with his buddies. Family was very important to him; he especially loved spending time with his grandkids. He was very proud of his children’s and grandchildren’s accomplishments. Charlie is survived by his wife, Terese, of 54 years; daughter Shari (Dan) Pellizzer of Iron River; sons Charles (Nancy) Pellegrini of Norway and Frank Pellegrini of Appleton, WI; grandchildren Tony (Abby) Neuens, Kurt Neuens, Lexi Pellizzer and Calli Pellizzer; great-grandson Henry Neuens; sisters Janis Tinti of Norway and Dorothy (Ron) Ferris of Grand Rapids; brother Roger Pellegrini of Vulcan; two exchange student granddaughters Carmen Hoyer of Germany and Lovisa Alenmark of Sweden; and a special godchild Rachel Minnella. Charlie was preceded in death by his parents; his father and mother-in-law Lawrence and Antoinette Neveau, brothers Ronald and William and brother-in-law Ernest Tinti. Family will greet friends on Saturday, December 10 from 8:30 to 10 a.m. at St. Mary’s Church in Norway. A Memorial Mass will be celebrated on Saturday at 10 a.m. at St. Mary’s Church with Fr. Timothy Ekaitis officiating. Interment will be held at Cemetery Park in Iron Mountain.

The family of Charles Louis Pellegrini created this Life Tributes page to make it easy to share your memories.