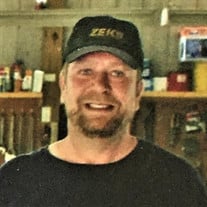 IRON MOUNTAIN- Daniel Americo Tinti age 59 of Iron Mountain, passed away at his home of natural causes on Sunday, September 16, 2018. Daniel was born May 18, 1959, in Lansing, MI, to George and Joan (Hayes) Tinti. Daniel was four when his family settled in Norway, MI, after residence in Appleton, WI, and Munising, MI, where his father completed engineering studies. Daniel attended Holy Spirit Catholic School and graduated from Norway High School. He served his country by enlisting in the U.S. Army as a Cavalry Scout, and Daniel received an Associate’s Degree in Digital Electronics through Lansing Community College. Dan loved biking and set out for Oregon, where he enjoyed the scenery and fresh air on his road bike for several years, while employed in food production. Dan’s biking and camping experiences put him in touch with many diverse people, and he made many friends. Returning to the Upper Peninsula, Dan’s interests turned to metal working, where his talent for creating custom trailers, fences, garden architecture, and flag poles were sought after. He was also a talented painter and finisher of woodwork, and people loved working with Dan because of his artistry and engaging personality. Enjoying the bounty of his surroundings, Dan was an avid woodsman, where he worked with his family and became a proficient saws-man. Dan was accomplished at measuring, peeling, cutting, and working in the woods. He built his own loader/trailer from scratch. Dan was keen on the four seasons in the U.P., but he especially looked forward to deer season. His vast collection of deer antlers are displayed in the family pole barn in Norway, and he was adept at teaching his nephews and anyone else the nuances of processing the prize. People enjoyed Dan’s friendliness and sense of humor. What surprised most was his insight and his gift for conversing on a wide variety of issues. Dan’s entertaining stories and amiable nature will be greatly missed by all who knew him. Daniel is survived by his mother, Joan Tinti of Norway; brothers Steven (Debra) Tinti of Crystal Falls, and David Tinti of Norway; sister Kathryn (Brian) St. Germain of Marquette, as well as nephews Christopher and Jason Tinti and nieces Melissa Tinti and Amanda St. Germain. He was preceded in death by his father, George Tinti. There will be no visitation. Interment will be held at the Norway Township Cemetery.

IRON MOUNTAIN- Daniel Americo Tinti age 59 of Iron Mountain, passed away at his home of natural causes on Sunday, September 16, 2018. Daniel was born May 18, 1959, in Lansing, MI, to George and Joan (Hayes) Tinti. Daniel was four when his... View Obituary & Service Information

The family of Daniel Americo Tinti created this Life Tributes page to make it easy to share your memories.

Send flowers to the Tinti family.