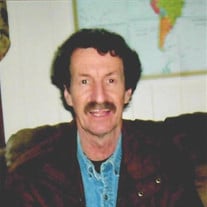 FAITHORN- David L. Riley age 71 of Faithorn, passed away Saturday, February 22, 2020 at the Oscar G. Johnson VA Medical Center in Iron Mountain, MI. He was born on August 2, 1948 in Norway, the son of the late Lynn and Helen (Knapp) Riley. David graduated from Norway High School in 1966 and went on to Michigan Tech for a year and a half. He served his country in the US Army during the Vietnam Era, and was honorably discharged in 1971. David married his high school sweetheart Mary Lou Tomososki on June 1, 1968 in St. Barbara’s Church in Vulcan. He worked for his father’s logging company Riley Forest Products and started at Kiser Johnson in 1979 as a millwright, through the years became a mechanical foremen/senior technical advisor. He loved his work and continued to work all over the United States driving to job sites up until his death. David enjoyed music like Patsy Cline, watching his deer, birds, turkeys, squirrels and other wildlife surrounding his property. He enjoyed helping others, and gave his heart and soul to his children and grandchildren, they made his life complete. He was always available to his children and grandchildren when anyone needed help fixing things, there was nothing David could not fix. He especially loved his great grandchildren Parker and Bronson Dessellier. No matter how he was feeling, they always put a smile on his face. In his spare time, he enjoyed tractors and bulldozing just to make roads, he was a die-hard Packer fan, every gift he received related to the Green Bay Packers was placed in his own Packer room that he set up in the basement. David never missed watching a game, the world stopped when the Packers were playing. David is survived by his wife of 51 years Mary Lou; daughters Rebecca Ann Dessellier of Iron Mountain and Laurie (Ed Benson) Britton of Powers; son Joel (Jimmie Lyn) Riley of Kingsford; grandchildren Alex (Jessica) Dessellier, Michael Dessellier, Allyssa Kirschner, Selena Britton, and Angelina Riley; great grandchildren Parker and Bronson Dessellier; sisters Marjorie (William) Schmitt of Wilson and Karen (Walter) Welch of Bark River; and brother Larry Riley of Hermansville; special nephew Rob Welch; numerous other nieces, nephews and great nieces and nephews. He was preceded in death by grandson Jacey Riley; and his parents Lynn and Helen (Knapp) Riley. Visitation will be held on Thursday, February 27 from 10 to 12 p.m. at the Ortman Funeral Home in Norway. Funeral Services will be held on Thursday at 12 p.m. at the Ortman Funeral Home with Rev. Dr. Michael Langlais of Good Shepherd Lutheran Church officiating. Interment will follow at Riverside Cemetery in Faithorn.

The family of David L. Riley created this Life Tributes page to make it easy to share your memories.

Send flowers to the Riley family.