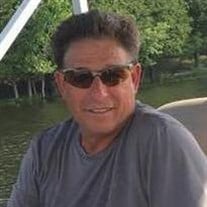 VULCAN- Don LeBombard age 66 of Vulcan, died unexpectedly, Saturday, July 7, 2018 as a result of a car accident in Vulcan, MI. He was born on November 2, 1951 in Chicago, IL, the middle son of the late Clifford and Margaret (Urek) LeBombard. Don was raised primarily in Hermansville and graduated from Hermansville High School in 1969. He married Sheryl Lardenoit on October 6, 1987 in Sandwich, MA. Don was a woodsman for many years before becoming a construction laborer and millwright, working primarily for the C.R. Meyer Company of Oshkosh, WI until his retirement in 2014. He was a member of the Carpenters & Millwrights Local 1510. Don was a member of St. Mary’s Church in Norway, a Fourth Degree Knight, active with the Holy Spirit Council #9523 and was a longtime usher at church. For many years, Don was admired and respected as a union millwright and had many friends at the various paper mills he worked at on shutdowns and construction projects. He used his talents after retirement on projects for his home parish of St. Mary's Norway, St. Barbara's Vulcan, and Holy Spirit School. Whether patching concrete, changing out light fixtures or prepping food for fundraisers, Don was the kind of volunteer everybody knew they could count on. He was also a great neighbor both at home and at the cottage, assisting with whatever he could to lighten the load of others. Don was a beloved partner in a hunting camp "Camp 41" and a big part of many great memories made there. His presence will be deeply missed by those that remain. He also enjoyed fishing off the cottage dock for blue gill and with his brother-in law Fran. A former woodsman, Don loved looking for morels and wild asparagus. This year he shared the bounty for weeks with family, friends and neighbors. There will be a lot of unpicked asparagus next year as a result of his loss! Don was an extraordinary partner to his wife. Always up for an adventure, they made so many memories with other hockey families during their son's hockey years, family fishing trips to Canada, anniversary trips, dinner clubs, winter adventures and just hanging out at the cottage. He was also a great dad, doing everything he could for his three boys. They are the caring & capable men they are largely due to their dad's influence. Most of all they will know how to take care of their mom. Don left this earth the very best version of himself. His faith journey over the last couple of years was remarkable, and he was becoming a healthier, gentler soul on his journey "home". We are so grateful he left this earth as a happy and well-loved man and we pray he was welcomed home by our Lord. Thank you to all for the love shared during his time on earth. Don is survived by his wife Sheri LeBombard; three sons, Chris (Laura) LeBombard of Waukesha, WI, Cody and Connor LeBombard both of Norway; grandson Jacob LeBombard; brothers and sisters Robert (Danna Sandberg) Smith of Hermansville, Harriet Poquette of Hermansville, Marty (Patty) Smith of Fairfield Glade, TN, Jean (Jim) Mosefelder of Appleton, WI, Brian (Bonnie) LeBombard of Pembine, Steve (Patti) LeBombard of Rapid River, and Joyce (Benny) Souder of Leander TX; sisters and brother-in-laws Roseann (Greg) Poetz of Mt. Pleasant, SC, Marianne (Fran) McCarthy of Hamilton Lakes; many nieces and nephews; several great nieces and nephews. He was preceded in death by his parents and brother Art LeBombard; brother-in-law Bernard Poquette and niece Natalie Smith; and nephew Jeffrey Poquette. Visitation will be held on Wednesday, July 18 from 4-8 p.m. at the Ortman Funeral Home in Norway. Parish Prayers will be held at 7:30 p.m. The Mass of Christian Burial will be celebrated on Thursday, July 19 at 10 a.m. at St. Mary’s Church in Norway, with Fr. Timothy Ekaitis officiating. Interment will follow at the Norway Township Cemetery. Family suggest memorial contributions may be made in Don’s name to Holy Spirit School in Norway. The family will be having a luncheon following the services and all are welcomed & encouraged to attend to further celebrate Don's life.

VULCAN- Don LeBombard age 66 of Vulcan, died unexpectedly, Saturday, July 7, 2018 as a result of a car accident in Vulcan, MI. He was born on November 2, 1951 in Chicago, IL, the middle son of the late Clifford and Margaret (Urek) LeBombard. Don... View Obituary & Service Information

The family of Donald Joseph LeBombard created this Life Tributes page to make it easy to share your memories.

Send flowers to the LeBombard family.