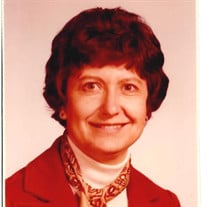 NORWAY- Donna Rae Anderson age 85 of Norway, passed away on Thursday, November 27, 2020 at Evergreen Meadows in Norway. She was born on December 16, 1934 in Norway, the eldest daughter of the late Ray and Helen (Bartl) Hall. Donna graduated from Norway High School in 1953. She attended Michigan State University and earned a Bachelor of Arts degree in Education. Donna married Donald A. Anderson on June 23, 1956 at Bethany Lutheran Church in Norway. He preceded her in death on December 18, 1988. Donna taught at Norway High School until she had her first child in 1960. She returned to full time teaching Junior High and High School English and history at Niagara High School until her retirement in 1991. Donna also taught community school adult education classes. Over the years, Donna was a member of the Michigan Education Association, Grace United Methodist Church, American Association of University Women and Norway-Vulcan Women’s Club. Donna also was a member and volunteer at the Jake Menghini Museum in Norway. Donna enjoyed reading, playing the piano, knitting, and especially her dogs. She loved music and treasured attending her children’s and grandchildren’s musical programs. Donna and her friends had season tickets to musicals and plays at the Weidner Center, as well as Northern Michigan Theater. She was fond of attending Norway City Band concerts and was proud that her father Ray and daughter Lisa had both been directors of the band over the years. Donna was a dedicated Spartan alumnus and religiously attended reunions with her former classmates and roommates. She had a passion for traveling and the family went on many camping trips across the country, stopping at many forts along the way. Donna also traveled extensively in Europe and Russia. Donna loved spending time at the family cottage on Lake Louise at Hamilton Lakes and often entertained her friends and family there. She is survived by her daughters Beth (Scott) Baker of Niagara, and Lisa (Stephen Betters) Anderson of Sagola; son Ray (Andrea) Anderson of Norway; grandchildren Andrew (Adilah) Beck, Christina and Anna Anderson; sisters Georgine (Gary) Riley of Gainesville, GA and Judy Casanova of Norway; an aunt Mae Philips of Powers; brother-in-law Charles “Nate” Anderson; and sister-in-law Donna Anderson; as well as numerous cousins, nieces and nephews. Donna was preceded in death by her nephews William Riley and Paul Anderson; brothers-in-law David Anderson and Roger Casanova; and sister-in-law Harriet Anderson. Interment will be held at the Norway Township Cemetery, and a celebration of life for Donna will be held next summer. The family would like to express a special Thank you to the staff at Evergreen Memory Care for the care and compassion given to Donna over the years. Family suggest that Memorial Contributions may be made to the Almost Home Animal Shelter.

NORWAY- Donna Rae Anderson age 85 of Norway, passed away on Thursday, November 27, 2020 at Evergreen Meadows in Norway. She was born on December 16, 1934 in Norway, the eldest daughter of the late Ray and Helen (Bartl) Hall. Donna graduated... View Obituary & Service Information

The family of Donna Anderson created this Life Tributes page to make it easy to share your memories.

Send flowers to the Anderson family.