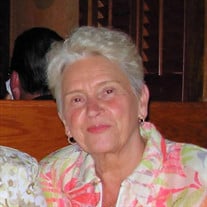 BRADENTON, FL. – Dorothy Mae Barribeau, age 86 of Bradenton, Florida, passed away on Thursday, December 16, 2021 at Tidewell Hospice Facility in Bradenton, FL. Dorothy was born on March 8,1935 in Hermansville, Michigan. The daughter of the late Eugene and Blanch (Faul) Stockero. Dorothy grew up in Hermansville, and shortly after graduating from high school, she married her high school sweetheart Gary Barribeau on February 13, 1954 in St. Mary’s Church in Hermansville, Michigan. They moved to Milwaukee, WI where Dorothy took a job at Cutler-Hammer Inc. In 1964 Gary & Dorothy moved their family to Port Washington, Wisconsin where they purchased the D&G Super Club. They created so many memories for family and friends. Over the years Dorothy enjoyed visiting with friends, playing cards, shopping, she had a passion for cooking as well as spending time with her family and especially her grandchildren. Dorothy survived by daughter Cheryl (Troy) Clary of Bradenton, FL, son Gary Jr. (Jackie) Barribeau of Three Lakes, WI, and daughter Karen (Greg) Wainscott of Bradenton, FL; 11 grandchildren; and 11 great-grandchildren; brother Eugene Stockero, and sister Janice Chartrie. Dorothy was proceeded in death by her husband of 66 years Gary Barribeau, and both her parents Eugene and Blanch Stockero. A memorial service will be made with the Ortman Funeral Home in Norway, Michigan in the spring of 2022. Interment will be held in the Meyer Township Cemetery in Hermansville in the spring.

The family of Dorothy Barribeau created this Life Tributes page to make it easy to share your memories.

Send flowers to the Barribeau family.