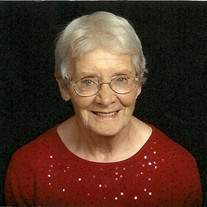 NORWAY- Dorothy K. Meneghini age 97 of Norway, passed away Sunday, June 3, 2018 at ManorCare in Kingsford, MI. She was born on March 9, 1921 in Norway, the last of five children of the late Joseph and Mary (Nilles) Awerdick. Dorothy graduated from Norway High School in 1939. She met her future husband, Edwin at a local dance. They were married on March 29, 1941 in St. Mary’s Church in Norway. He preceded her in death on March 1, 1997. Dottie’s enjoyments included running and walking, she was a participant in many races, and she even met Joan Benoit Samuelson, who was an Olympic gold medal winner. At age 88 she went ski-diving. She enjoyed writing, playing Scrabble and doing crossword puzzles. Dorothy loved camping, and camped the UP and Wisconsin. Joy to her was being in a blueberry or strawberry patch picking berries. Dorothy challenged everyone, family and friends to a good game of cribbage, thanks to Walt Werden for all the mornings spent with mom and the cribbage board. Her life interests included Right to Life, being a Green Bay Packer Backer, an avid Detroit Tigers fan, a member of St. Mary’s Church, Women of St. Mary’s, the Norway-Vulcan Senior Center, St. Vincent DePaul Society, the Red Hat Society, and Good Sams Club. But Dorothy’s most favorite moment was rocking every precious new baby in her family and life. Dorothy is survived by her eight children Dennis (Maxine) Meneghini of Hamilton Lakes, Lee (Marge) Meneghini of Norway, Lynne (Charles) Wiethoff of Iron Mountain, Monica (Alan) Erickson of Kingsford, Boofer Anderson of Iron Mountain, Neil (Karen) Meneghini of Florida, Mark (Pam) Meneghini of Norway and Elise (Richard) Hermsen of Green Bay, WI. She was the proud grandmother of 20 grandchildren; 35 great grandchildren; and 5 great great grandchildren. She was preceded in death by her husband of 55 years Edwin; granddaughter Jodi (Mark) Danielson; great grandchildren David and Elliot Danielson; son-in-law George Anderson; sisters Martha Tavis, Melissa Waeghe, Betty Carmen; and brother David Awerdick. Visitation will be held on Sunday, June 10 from 4 to 8 p.m. at the Ortman Funeral Home in Norway. The Mass of Christian Burial will be celebrated on Monday, June 11 at 10 a.m. at St. Barbara’s Church in Vulcan. Interment will be held at the Norway Township Cemetery at a later date.

NORWAY- Dorothy K. Meneghini age 97 of Norway, passed away Sunday, June 3, 2018 at ManorCare in Kingsford, MI. She was born on March 9, 1921 in Norway, the last of five children of the late Joseph and Mary (Nilles) Awerdick. Dorothy graduated... View Obituary & Service Information

The family of Dorothy Katherine Meneghini created this Life Tributes page to make it easy to share your memories.

Send flowers to the Meneghini family.