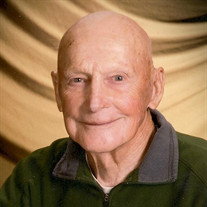 NORWAY- Edward L. “Edgie” Bal age 85 of Norway, died Wednesday, September 14, 2016 at the Oscar G. Johnson V.A. Medical Center in Iron Mountain, MI. He was born on June 12, 1931 in Norway, the son of the late Joseph and Margaret (Smith) Bal. Edgie graduated from Norway High School in 1949. He served his country in the U.S. Army during the Korean Conflict until 1954. He married Marie Polomis on August 25, 1956 in St. Rose’s Church in Racine, Wisconsin. He started working for Michigan Bell in 1957 and retired from AT&T in 1991. At that time he started his own business (Bal Communication) and supported the Quinnesec Mill’s phone systems until 2012. Edgie was a member of St. Mary’s Church in Norway, a very active member of the Hall-DeWinter Post #145, American Legion, sat on the Norway City Council, Norway Parks and Recreation Committee and the Norway Electric Utility Board. He was an avid gardener with his special friend and helper Shelly Danielson, he loved fishing and hunting, woodworking with special friends Wayne and Mary Hulce, making and sharing wine and apple juice. He especially enjoyed going fishing in Alaska for the past four years, with special friends Dave and Jeanne Mott. Ed is survived by his wife of 60 years Marie; sons Michael (Sally) Bal of Norway, Patrick Bal of Vulcan and Thomas (Angie) Bal of DePere, WI; daughters Kathleen (Don) Fiorani of Marquette, Donna DuLong of Denver, CO and Suzanne Bal of Green Bay, WI; grandchildren Anne (Mike) Schienke of Clinton Twp, MI, Jill Bal of Chandler, AZ, Amy Fiorani and John Fiorani both of Marquette, Billie Bal and Rachael Bal both of DePere, WI; brothers Joseph “Tat” Bal and George (Betty) Bal both of Norway; sisters Marie Devine of Norway, Patsy (Bill) Zanona of Vulcan and Marge (Lee) Meneghini of Norway; sisters-in-law Bernice Bal and Joan Bal both of Norway; several nieces, nephews and cousins. He was preceded in death by his brothers John and Wally Bal; his brother-in-law Robert Devine and sister-in-law Margie Bal. Visitation will be held on Sunday, September 18 from 4-7 p.m. at the Ortman Funeral Home in Norway. Parish Prayers will be cited at 7 p.m. on Sunday. A Memorial Mass will be celebrated on Monday, September 19 at 9:30 a.m. at St. Mary’s Church in Norway, with Fr. Timothy Ekaitis, presiding. Interment will follow at the Norway Township Cemetery.

The family of Edward "Edgie" Bal created this Life Tributes page to make it easy to share your memories.

Send flowers to the Bal family.