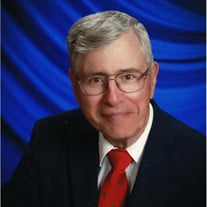 NORWAY- Edward “Jerry” Coates age 82 of Norway, died Tuesday, May 24, 2022 at McLaren Northern Michigan Hospital in Petoskey, MI. He was born on August 8, 1939 in Shelbina, Missouri. The son of the late Robert and Jesse (Hall) Coates. Jerry graduated from Mound City High School in 1958 and entered the US Army as a recruit. While in the Army, he received his Bachelor of Arts in Business Administration from William Carey College in Hattiesburg, MS. Serving in the Army was one of the proudest periods in his life. He worked his way to the rank of Major before his retirement in 1979 after 21 years of service. His military career entailed several assignments, most notable included two tours of duty in Vietnam, where he was awarded four Bronze Stars, one with a ‘V’ for Valor. Early in his military career, Jerry met Garen Vigo in Washington DC and they married on January 14, 1961. After the military, Jerry worked for the City of Norway as a Clerk and Treasurer and retired after 10 years. Prior to working for the City, he held positions at Bacco Construction, Lodal and Kingsford Broach and Tool. He also worked part time at Breeze Auto Parts after retiring from the City. Jerry served on the Norway City Council and was acting Mayor for a portion of that time. For his hobbies, Jerry was an avid gardener and had an affinity for Roundup. But nothing was bigger than Drag Racing and working on cars. It has been his passion since he was a teenager, and he was still racing just two years ago. Mopar was his brand and he had been racing his 1966 Coronet since he bought it brand new in Iron Mountain. Never one to ‘slow down’, he was building a new car to go even quicker at the time of his passing. He was a member of St. Mary’s Church in Norway, Norvulet VFW Post #4581 and the Hall-Dewinter Post #145 American Legion, and was a distinguished member of the 1st Infantry Division, 16th Regiment. Jerry is survived by his wife of 61 years Garen; son Michael (Stacie) Coates; grandchildren Alexis Coates and Andrew Coates; brother Tom (Sharon) Coates; sisters Shannon Coates, and Mary Ann (Tom) Muse; Sister-in-laws Lillie Anne Vigo and Karen (Crowley) Coates, Brother-in-law Clifford Steeby, and many nieces and nephews. He was preceded in death by his daughter Denise Coates; brothers Dennis and Robert (Karen) Coates; and sister Martha Steeby. Visitation will be held on Friday, June 3 from 9-11 a.m. at St. Mary’s Church in Norway. The Mass of Christian Burial will be celebrated on Friday at 11 a.m. at St. Mary’s Church with Fr. Marty Flynn officiating. Interment will follow at the Norway Township Cemetery.

The family of Edward "Jerry" Coates created this Life Tributes page to make it easy to share your memories.

Send flowers to the Coates family.