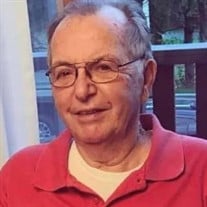 Not sure what to send?

VULCAN - Edward “Ed” John Rozine, age 82, of Vulcan, passed away peacefully with his wife and family by his side on Monday, January 10, 2022 after a brief illness at Dickinson Co. Memorial Hospital in Iron Mountain, MI. He was born May 25, 1939 in Norway, the son of the late Fred and Winifred (Hosking) Rozine. Ed graduated from Norway High School class of 1957. Following graduation, he proudly served in the United States Navy as an electrician serving in the Pacific and Alaska on the Bon Homme Richard aircraft carrier, which included time during the Vietnam Era. Following his time in the military, Ed worked for several area businesses, until he started working at the Norway-Vulcan Area School, where he retired from after 29 years. He married Rita Zychowski on June 22, 1963, at St. Barbara Catholic Church. Ed was a member of the St. Barbara Catholic Church, Vulcan-Norway-Loretto Lions Club, and the Loyal Order of the Moose. He loved spending time with his family, especially his grandchildren and great-grandchildren. He loved the outdoors hunting and snowmobiling and was an avid Packer fan, John Deere enthusiast and Daily News reader. Survivors include his wife of 58 years Rita; three sons, Mark (Brenda) Rozine of Iron River, Eric (Kabrina) Rozine of Ann Arbor, Brad Rozine of Iron River, and one precious daughter Dana (Matt) Paler; nine grandchildren, Jonathon, Chris, Jeremy, Aurora, Zoe, Olivia, Alec, Jenna and Caitlin; two great-grandchildren, Haddie and Asher; sisters-in-law Kay (Terry) Backlund, Denice (Richard) Westcott; brother-in-law Jack Palmcook and many nieces and nephews. In addition to his parents and in-laws, Ed was preceded in death by his sister, Donna Winters. Family will greet friends on Wednesday, January 19 from 9 -11 a.m. at St. Barbara’s Church in Vulcan. A Memorial Mass will be celebrated on Wednesday at 11 a.m. at St. Barbara’s Church with Fr. Marty Flynn officiating. Interment will be on Wednesday, May 25 at 10 a.m. at the Norway Township Cemetery. Ed’s family would like to Thank, the hospital staff at the Dickinson Co. Memorial Hospital for their gracious care this past week.

VULCAN - Edward &#8220;Ed&#8221; John Rozine, age 82, of Vulcan, passed away peacefully with his wife and family by his side on Monday, January 10, 2022 after a brief illness at Dickinson Co. Memorial Hospital in Iron Mountain, MI. He was born... View Obituary & Service Information

The family of Edward Rozine created this Life Tributes page to make it easy to share your memories.