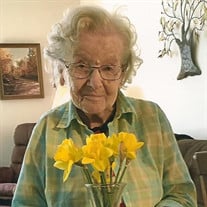 VULCAN- Eileen G. Williams age 94 of Vulcan, died Monday, July 23, 2018 at Evergreen Assisted Living in Norway, MI. She was born in Ransom, IL. on January 11, 1924 the daughter of the late Floyd and Margaret (Casey) McClary. Eileen graduated from Aurora East High School. She married Robert Williams on February 2, 1946 in Aurora, Illinois. He preceded her in death on September 26, 2011. Eileen is a member of St. Barbara’s Church, a diehard Cubs fan, Bears fan and loved watching any sports on TV or that her grandchildren were playing. She was a devoted wife and mother, a kind, gentle and sweet person. Eileen was an honorary caregiver at Evergreen always checking up on the residents and praying for them. Eileen is survived by her sons Alan (Mary Kay) Williams of Florence, WI., and Bryon (Laurie) Williams of Iron Mountain; daughter Carol (Mark) Skog of Norway; grandchildren Robert (Ashley) Skog, Christopher (Justine) Skog, Daniel (Jessie) Skog, Tom (Kristina) Williams and Kary Nicholas; great grandchildren Jeffrey, Collin, and Marin Nicholas, Harmony, Anderson, Lillian Skog and baby to be born in November, and Gabriel Williams. She was preceded in death by her great grandchild Zoey; sisters Josephine Reder and Bernadine Nolte. Visitation will be held on Friday, July 27 from 9 – 11 a.m. at St. Barbara’s Church in Vulcan. The Mass of Christian Burial will be celebrated on Friday at 11 a.m. at St. Barbara’s Church with Fr. Timothy Ekaitis officiating. Interment will follow at the Norway Township Cemetery.

The family of Eileen Gertrude Williams created this Life Tributes page to make it easy to share your memories.

Send flowers to the Williams family.