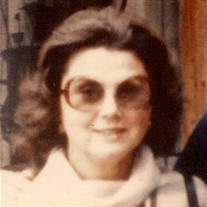 NORWAY- Elaine A. Bertoldi age 90 of Norway, died Friday, November 11, 2016 at Dickinson Co. Memorial Hospital in Iron Mountain, after a brief illness. She was born on February 12, 1926 in Quinnesec at the Pancheri General Store, the daughter of the late Isadore and Mamie (Davey) Pancheri. Elaine grew up in Quinnesec and graduated from Quinnesec High School in 1944, which was the last class to graduate from the school. After high school, she worked in Milwaukee throughout the war years. She returned to Quinnesec and married Robert Bertoldi at St Mary's Church on June 8, 1947. The couple resided in Norway where she dedicated herself to raising their four children. She was a member of many organizations, an avid weekly bridge player, did the daily crosswords, and enjoyed traveling across the country and throughout the world. She is survived by her daughters Sally (Bill) Hood of Christchurch, New Zealand and Trish Cescolini (Don Hood) of Cave Creek, Arizona, and son James (Marsha) Bertoldi of Breitung Township, grandson Joseph (Lexi) Lewis of Sydney, Australia, 2 great grandsons, one sister , Eleanor Johnson of Rhinelander, Wisconsin, and many nieces and nephews. In addition to her parents, she was preceded in death by her husband Robert, son John, brothers Emanuel and Raymond Pancheri and sisters Lucille Bilski and Rachel Peters. Respecting Elaine's wishes, there will be private funeral services. A celebration of her life will be held at a later date when the family from out of the country can gather. Family request that no flowers be sent at this time.

NORWAY- Elaine A. Bertoldi age 90 of Norway, died Friday, November 11, 2016 at Dickinson Co. Memorial Hospital in Iron Mountain, after a brief illness. She was born on February 12, 1926 in Quinnesec at the Pancheri General Store, the daughter... View Obituary & Service Information

The family of Elaine A. Bertoldi created this Life Tributes page to make it easy to share your memories.

Send flowers to the Bertoldi family.