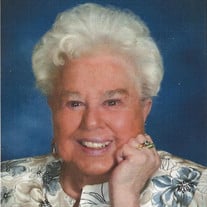 NORWAY- Evelyn Gale Benzie age 94 of Norway, died Saturday, May 22, 2021 at Dickinson Co. Memorial Hospital in Iron Mountain, MI. She was born on May 26, 1926 in Norway, the daughter of the late Florent and Marie (VanLaere) VanEynde. Evelyn moved to Oak Park, Illinois at a young age and graduated from Oak Park High School. After high school she supported the War effort in a converted canning factory and later attended comptometer school. She worked as a comptometer until she married Ward Edward Benzie in June of 1946 in Chicago, IL. He preceded her in death on June 8, 1992. Evelyn and Ward moved to the Upper Peninsula, where Ward ran a logging business. Once her children were born, Barbara and Kathleen, they moved to Marquette, where Ward owned and operated a Standard Oil gas station. They moved the family to Houston, Texas when the girls were high school age and Ward then worked for IBM at NASA in the 1960’s. They later transferred to Vermont where Evelyn worked for IBM until retiring in 1986. After Ward passed away, Evelyn moved back to Norway, having come full circle. She was a member of St. Mary’s Catholic Church, having been a devout Catholic all her life. She was active in St. Mary’s Women’s Group, a devoted mother and wife, who enjoyed sewing, knitting and quilting. Later in her life she had a special friend Floyd Steeno and enjoyed the company of his family. Evelyn is survived by her daughter Barbara Benzie of Norway; grandchildren Sean (Jen Procopio) Luck, Holly (John Silva) Luck, Maria (Justin) Benzie-Chaney, Nichole Potvin-Weber and Philip Potvin; great grandchildren Patrick and Kathryn Luck, Eddie, Brett and Allison Weber, Landon and Elizabeth Potvin. She was preceded in death by her daughter Kathleen Marie Potvin, brother Robert VanEynde and her sister Leona Pantle. Visitation will be held on Wednesday, May 26 from 4-7 p.m. at the Ortman Funeral Home in Norway and on Thursday, May 27 from 10:30 -11:30 at St. Mary’s Church in Norway. The Mass of Christian Burial will be celebrated on Thursday at 11:30 a.m. at St. Mary’s Church with Fr. Timothy Ekaitis officiating. Interment will follow at the Norway Township Cemetery.

NORWAY- Evelyn Gale Benzie age 94 of Norway, died Saturday, May 22, 2021 at Dickinson Co. Memorial Hospital in Iron Mountain, MI. She was born on May 26, 1926 in Norway, the daughter of the late Florent and Marie (VanLaere) VanEynde. Evelyn... View Obituary & Service Information

The family of Evelyn Gale Benzie created this Life Tributes page to make it easy to share your memories.

Send flowers to the Benzie family.