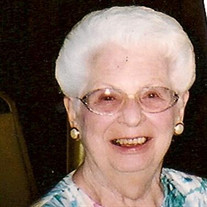 NORWAY- Evelyn L. Gyselinck age 89 of Norway, died Monday, February 9, 2015 at Dickinson Co. Memorial Hospital in Iron Mountain, MI. She was born on January 28, 1926 in Norway, the daughter of the late Arminio and Helen (Gironimi) Zadra. Evelyn graduated from Norway High School in 1944, and continued her education at St. Mary’s School of Nursing in Indiana graduating in 1947, where she then joined the government cadet nursing program. Evelyn worked as a Registered Nurse at Grace Hospital in Detroit, until she retired in 1980. Evelyn married Leonard Gyselinck on May 8, 1948 in St. Barbara’s Church in Vulcan. He preceded her in death on May 2, 2005. Evelyn was a member of St. Barbara’s Church, Oak Crest Golf Course, Tyrolean Club, Women of the Moose, and the Jake Menghini Museum. She was an avid reader, enjoyed cooking, playing cards and listening to music from the Big Band Era, and attending class reunions, having breakfast with her dear friends, and especially spending time with her grandchildren. Evelyn is survived by her sons Leonard (Jan) Gyselinck of Farmington, Thomas Gyselinck and Daniel Gyselinck of Norway; grandchildren Christopher Gyselinck of Los Angeles, CA and Sara Gyselinck of Farmington; nephews George Kine of Spring Grove, IL and Robert Kine of Surprise, AZ; special cousins Richard (LaVern) Pedri of West Allis, WI and Daniel (Kathy) Albedyll of Clinton, WI; special friends Lonnie and Kathy Wilson and their children; and special card playing friends. Private Family Services will be held for Evelyn. Interment will be held at the Norway Township Cemetery in the spring.

The family of Evelyn Lona Gyselinck created this Life Tributes page to make it easy to share your memories.

Send flowers to the Gyselinck family.