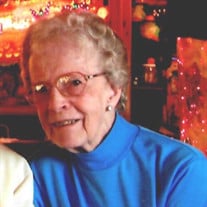 IRON MOUNTAIN- Genola Louise Herman age 99, of Iron Mountain, passed away Wednesday, July 15, 2020 at Pinecrest Medical Care Facility in Powers, Michigan. Genola, who was known by many as “Gen” or “Jen”, was born in Norway on February 11, 1921, the daughter of the late Julius and Bernice (Anderson) Cretton. She attended two Niagara country elementary schools, one located on US 8 and the other located on 141, both about a mile from the US8/141 intersection, where the Cretton Farm was located. Genola graduated from Niagara High School in 1939, later that year she moved to Chicago. Even though her future husband Joseph Herman, was also born in the Penn Hospital in Norway, she did not meet him until they had both moved to Chicago, where mutual friends from back home introduced them to each other. They were married on May 10, 1941 in Chicago. They were married for 67 years before Joseph preceded her in death on May 26, 2008. Genola acquired her Illinois and Michigan Beautician licenses and ran her own shop, “Jen’s Little Shop” in Evanston, IL., where they lived until Joe retired and they moved to a place on the Kremlin Road and Pemebonwon River near Pembine, WI. For many years Genola was active in St. Mary Catholic Church in Evanston, IL, where she held Bible classes in her home, participated in the Censorship of Pornography efforts, and was a Cub Scout and Brownie Den Leader. She also was an election precinct judge for many years in Evanston. Genola is survived by her children Karen Jo Herman of Iron Mountain; Barbara and Jim Mulka of Mundelien, IL/Sanibel Island, FL; three grandchildren John Allen (Michele L.) Herman of Sanibel Island, FL, Tina (Sean) Fenniman of Stuart, FL, and Wally Mulka (Becky) of Sanibel Island, FL; six great grandchildren Kaitlyn Herman, Kylie Noel (David) Sevenski, Grace, Isabelle and Arabelle Fenniman, and Audrey Mulka; sister Bonnie Eternicka of Rhinelander, WI.; and many nieces and nephews. She was preceded in death by her son Allan Herman, who was killed in Vietnam; brothers, Dumont, Robert, William, Clayton, Joseph and Cecil Cretton; sisters, Mercy Flint, June Binion, Elaine LaRoche, and Maxine Cretton. Private family graveside services will be held at the Norway Township Cemetery. Genola’s family would like to say “Thank You” the staff of Family Ties and Pinecrest Medical Care Facility for the wonderful care they provided for the past several years.

The family of Genola L. Herman created this Life Tributes page to make it easy to share your memories.

Send flowers to the Herman family.