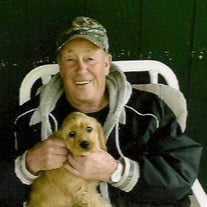 NORWAY- George L. Hewlett age 78 of Norway, passed away peacefully on Wednesday, November 1, 2017 at Dickinson Co. Memorial Hospital in Iron Mountain, with his family at his side after a courageous battle with pancreatic cancer. He was born in Marquette, the son of the late Raymond and Adele (Pezzotti) Hewlett. He moved to Norway as a young boy, and graduated from Norway High School in 1958. George started working for Northland Grocers in Norway as a teenager and retired with 36 years of service in 1993 as a truck driver and lead man. George married his high school sweetheart Geraldine Badini in 1959, she preceded him in death in 1981. In 1986, George married Marilyn Bohnett. George’s happiest times were spent at Camp Marsh. George built his camp with the help of several friends and family. He was an excellent carpenter, building his cabinets at camp, hanging lights, deck chairs, anything that was needed. He always created another project to work on. George’s hobbies were fishing, hunting and creating a little mischief. The annual walleye fishing trip in Escanaba, was similar to the annual deer hunting season. Although, the walleye stay included George getting his hand caught in a mousetrap while in the cookie jar in the middle of the night, the antics of fishing buddy. There was summer boating and winter ice fishing, fall was bird, bow and rifle hunting and then there was muzzle loading season. His recent hobby was taking the side by side for extended rides with Marilyn and friends or bird hunting with the boys. He enjoyed going through an area that wasn’t navigable, but George had to try, because that was why he had a winch on the machine. George enjoyed working in his large garden at home, planting after the first frost and sharing the harvest with family. George and Marilyn enjoyed several bus trips with Norway friends throughout their 31 ½ years of marriage, to Branson, New York and Nashville. He was a member of the Loyal Order of Moose #1474, and St. Mary’s Roman Catholic Church in Norway. George will be missed by his beloved wife Marilyn; sons Jeff (Lynn) Hewlett, Paul (Rhonda Poupore) Hewlett; grandchildren Dr. Ann (Isaac) Miller, Brian (fiancé’ Haylee Rose) Hewlett, Heather Hewlett; great grandchild Penny Lynn Miller; brothers Don Bosco “Mike” Hewlett and Ray (Sharon) Hewlett; aunt Jenny Farragh; brothers-in-law Bill (Marsha) Bohnett, Darold Cousineau; sisters-in-law Shirley DeLongchamp, Dolores Haglund and Donna (Loren) Duer; several nieces, nephews and friends. He was preceded in death by his brother-in-law Al Haglund, and sister-in-law Dolores Bohnett. Visitation will be held on Saturday, November 4, from 9-10 a.m. at St. Mary’s Church in Norway. A Memorial Mass will be celebrated on Saturday, at 10 a.m. at St. Mary’s Church with Fr. Timothy Ekaitis, presiding. Interment will follow at the Norway Township Cemetery.

NORWAY- George L. Hewlett age 78 of Norway, passed away peacefully on Wednesday, November 1, 2017 at Dickinson Co. Memorial Hospital in Iron Mountain, with his family at his side after a courageous battle with pancreatic cancer. He was born... View Obituary & Service Information

The family of George Louis Hewlett created this Life Tributes page to make it easy to share your memories.

Send flowers to the Hewlett family.