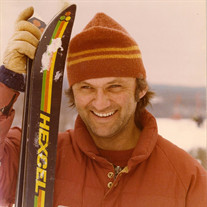 VULCAN- Gerald “Bomber” DeBernardi age 76 of Vulcan, died Sunday, January 3, 2016 at the Iron River Care Center in Iron River, MI. Gerald was born on July 6, 1939 in Loretto, the son of the late Peter and Rose (Solfanelli) DeBernardi. Gerald graduated from Niagara High School in 1957, then attended Northern Michigan University and graduated in 1963. While at Northern he became a member of Delta Sigma Phi Fraternity. After college Gerald became an art teacher and taught in Gwinn and in Detroit. In 1977 Gerald married Linda Pietrantonio and she had two children, Tami and Jamie Tomasaski, which he had always claimed as his own. In 1984 he and Linda had their only child, a son Dante Lee DeBernardi. Gerald was an amazing father and he and Dante were so very close, not only was he a great father, but also a best friend to his son. In the mid 90’s he took over as owner of “Bomber’s” Golf Course, a place his father built, and handed down to him to run and operate. Gerald was always a hard worker and had a memorable personality; he made many lifelong friends there. Along with Bombers, Gerald was involved in many things; he owned his own construction business, DeBernardi and Son Construction and was also a professional ski instructor at Norway Mountain and Pine Mountain. Gerald really loved being outdoors and skiing. Gerald was an incredible skier, at one point nationally ranked; he also enjoyed anything to do with art and pottery. Mostly he enjoyed his family and his dogs, he was a proud Italian Man and will be missed, loved and remembered, never forgotten. Gerald is survived by his son, Dante DeBernardi; step-daughter Tami Miller; step-son Jamie Tomasaski; grandchildren Sierra DeBernardi, Tyler Nora, Kyle Cransbury and Brianna Tomasaski; aunts, uncles, cousins and many friends; special friends Tom Bugni and John and Barb Messer. Memorial services have been held for Gerald.

The family of Gerald Louis DeBernardi created this Life Tributes page to make it easy to share your memories.

Send flowers to the DeBernardi family.