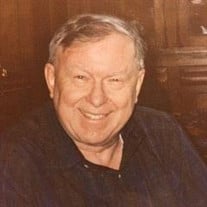 LAKE FOREST, IL- Dr. Gerald F. VerMeulen age 88 of Lake Forest, IL, formerly of Norway, passed away Tuesday, November 5, 2019 at Bickford Independent & Assisted Living Center in Bourbonnais, IL. Dr. VerMeulen, known to friends and family as Jerry or Zule, was born May 9, 1931 in Norway, the son of the late Julius and Elsie (Vanden Heuvel) VerMeulen. Jerry graduated from Norway High School, received his Doctor of Veterinary Medicine with high honors from Michigan State University in 1955 and went on to start and own a practice for 37 years. He married Carol A. Schulte on June 20, 1953, and had three children Michael VerMeulen, William (Sylvia) VerMeulen and Ann (Michael) O’Gorman. Jerry was an avid Green Bay Packers and Cubs fan and enjoyed arguing with any Bears fan nearby. His grandchildren will remember him for his sacred bowl of peanut butter M&M’s of which he always allowed them only two. He was happiest at his farm in the Upper Peninsula of Michigan, where he enjoyed visiting with friends and family and taking trips to the DeYoung Family Zoo. He is survived by his son William (Sylvia) VerMeulen and daughter Ann (Michael) O’Gorman; grandchildren Michael, Eileen, Nicole, Kevin and Allison; sister Carol Moraska; along with the many wonderful caretakers and friends. He was preceded in death by his wife Carol, son Michael VerMeulen, parents Julius and Elsie VerMeulen, and his sisters Lorraine and Laverne VerMeulen. Visitation will be held on Monday, November 11 from 12-1 p.m. at the St. Mary's Church in Norway. The Mass of Christian Burial will be celebrated on Monday at 1 p.m. at St. Mary's Church with Fr. Michael Kowalewski, presiding. Interment will follow at the Norway Township Cemetery. The family suggest memorial contributions may be made in Jerry’s name to the DeYoung Family Zoo. DeYoung Family Zoo, N5406 County Road 577, Wallace, MI 49893

The family of Dr. Gerald F. VerMeulen created this Life Tributes page to make it easy to share your memories.

Send flowers to the VerMeulen family.