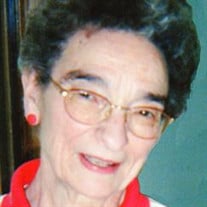 NIAGARA TWP- Helen Mae Krull age 90 of Niagara Township, died Monday, June 24, 2019 at Freeman Nursing and Rehabilitation Community in Kingsford, MI. She was born December 13, 1928 in Niagara, the daughter of the late Nelson and Georgianna (Wellever) Chapman. Because they lived on a rural farm she had to stay with relatives in Marinette in order to attend high school, where she graduated Marinette High School in 1946. While working in Milwaukee she met and married her husband, Herman Krull, on October 25, 1947. He preceded her in death on January 23, 1999. Early in their marriage the couple lived in Iowa, Milwaukee and Beecher, WI. They settled back in Niagara Township where they raised their family. Helen worked at the Niagara Post Office as a postal clerk for over 20 years and was a member of the National Association of Letter Carriers. She enjoyed her job delivering mail in what she always thought of as the beautiful village of Niagara. She and Herman gladly shared the bounty of their garden. They loved the adventure of traveling throughout the US, and also Canada, Mexico and Germany. She loved being outdoors, having been raised as a farm girl, riding horses, taking walks, gardening. She loved baseball. Most of all she was dedicated to her family, so she coordinated Chapman family reunions to bring them all together. She was faithful in visiting shut-ins, offering rides and sending cards. She was an active member of the Niagara Happy Helpers-Homemakers Club. She lived life purposefully, which included being a founding member of the local chapter of the Alliance for the Mentally Ill. Throughout her life it was important for her to be involved in her community church, which started with the Evangelical Covenant Church Mission Chapel on Chapman Road, the Niagara Union Protestant Church, and then the First United Methodist Church in Iron Mountain. Helen is survived by two daughters and a step daughter: Beth (Dave) Canavera, Judy (Tim) Smith, and Sandra (George) Pabich; 14 grandchildren: Scott, Terese, Nathan, Jacqueline, Dolly, Zac, Erin, Andrew, Wade, Stephanie, Kerry, Phyllis, George and Arianne; 22 great grandchildren and 8 great, great grandchildren, plus numerous nieces and nephews. Helen was preceded in death by two children, Bruce (LC) Krull and Kathy Oien; brothers William, Earl, Dan and Guy Chapman; and sisters Adelaide Trulock, Kathryn Haywood and Lu Ebben. Visitation will be held Sunday June 30, 2019, from 12 to 1 p.m. at the Ortman Funeral Home in Norway. The Funeral Services will be held on Sunday at 1 p.m. with Tim Smith officiating. Private interment services will be held at the Hillcrest Cemetery in Niagara.

The family of Helen Mae Krull created this Life Tributes page to make it easy to share your memories.

Send flowers to the Krull family.