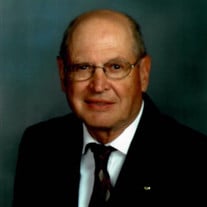 NORWAY- Henry Joseph Opolka age 86 of Norway, went to be with the Lord on Wednesday, November 28, 2018 surrounded by his family. He was born on November 20, 1932 in Norway the son of the late John and Mary (Babula) Opolka, who were immigrants from Zawatka, Poland. Henry lived his entire life in Norway. He worked for the A&P Store, and at Norway Gravure beginning as a pressman working his way up to Plant Manager. He retired in 1994, after 41 years. He enlisted in the National Guard in 1950, serving for 8 years. Henry married Kathleen Bouffiou on October 6, 1956 at the Queen of Peace Catholic Church in Kingsford. He was a member of the Knights of Columbus, Sons of the American Legion, St. Mary’s Catholic Church in Norway, the Holy Name Society and past member of UCT. Henry loved spending time at his hunting camp, the “Waucedah Hilton”, and he loved being with family and friends. He enjoyed polka music, playing the concertina and the drums. He also played with several bands, including The Polka Cats, Sid Peterson Band and the Opolka Brothers Band. Henry had a passion for old cars. Throughout his life he owned and operated 49 cars and trucks. Four Model “A” Fords kept him busy, especially the 1930 five window coupe with a rumble seat. Many knew Henry as Yashek and he was JaJa (polish for grandfather) to his grandchildren, great grandchildren and their friends. He was a man of strong faith with a deep love for his family. Henry was an avid Packers and Norway Knights fan, often found listening to games on his transistor radio. He liked working in his garage and with a little Polish ingenuity he could fix anything. He is survived by his wife of 62 years Kathleen; and their six children Mary Jean (Bernie) Larson, John (Sherri) Opolka, Kathy (Neal) Johnson, Janice (Jim) Heipel, Douglas (Joan) Opolka and Karen (Tyler) Stoner; grandchildren Allan Larson, James (Christina) Larson, Kathryn (Rick) Wright, Kimberly (Derek Seilbach) Opolka, Eric Opolka, Zachery Johnson, Zachary Heipel, Jacob and Jorden Stoner, Joseph and Angela Opolka; great grandchildren Henry, Emma, Olivia, Kylie, Isaiah, Kayla, Ava, Axel, Jace, Alivia and a baby boy on the way in spring; he is also survived by sisters-in-law Irene Opolka, Elaine Beyer and Lillian Bouffiou; and many nieces and nephews. Henry was preceded in death by his brothers Walter, Joseph and Anton Opolka; and his sisters Ann Stanek and Sophie Kanyuh. Visitation will be held on Friday, December 7 from 9-11 a.m. at St. Mary’s Church in Norway. A Memorial Mass will be celebrated on Friday, December 7 at 11 a.m. at St. Mary’s Church with Fr. Timothy Ekaitis officiating. Interment will be held in the spring at the Norway Township Cemetery.

NORWAY- Henry Joseph Opolka age 86 of Norway, went to be with the Lord on Wednesday, November 28, 2018 surrounded by his family. He was born on November 20, 1932 in Norway the son of the late John and Mary (Babula) Opolka, who were immigrants... View Obituary & Service Information

The family of Henry Joseph Opolka created this Life Tributes page to make it easy to share your memories.

NORWAY- Henry Joseph Opolka age 86 of Norway, went to be with...

Send flowers to the Opolka family.