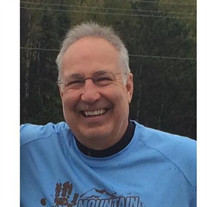 HAMILTON LAKES- James H. Moore age 60 of Hamilton Lakes, died unexpectedly Friday, February 13, 2015 in Puerto Plata, Dominican Republic. He was born on October 31st, 1954 in Detroit, MI. the son of the late Bud and Betty Moore. Harvey graduated from Norway High School in 1972. He continued his education at Michigan Technological University where he completed an associate degree in land surveying. Following graduation he traveled down to Ferris State University and obtained his Bachelor’s degree, also in land surveying. Harvey’s surveying career brought him all over the country with long stints in Colorado where he worked for Nolte Engineering and here locally at Coleman Engineering. Starting at Coleman as a land surveyor, Harvey climbed through the ranks to be named partner and ultimately president of the company. His presidency became official just six weeks ago on January 1st, 2015. Harvey loved to spend time watching his kids and nephews play sports. Chris, Jeff, and McKenzie were all active in a wide variety of sports and there was no more devout a fan than Harvey Moore. His nephews Nick and Kyle Zweifel were multi-sport athletes at Norway, and there weren’t many of their games or matches where you couldn’t find Harvey in the stands. Through countless high school games for all these kids and college games at Michigan Tech for Chris, Harvey was a constant presence. As with all things in life, he was unfailingly positive and far more concerned with sportsmanship than scoreboards. Harvey didn’t always just watch the kids, more often he laced up the skates and joined them. Right up until his last day Harvey was playing sports like a 30 year old. Whether it was men’s league hockey, Thirsty Whale volleyball, or just a pick-up game in the gym, he was always up for a game. Over the years he ran many marathons and team relay events out in the Rocky Mountains. He remained an avid runner to the end and was looking forward to his 20th consecutive running of Grandma’s Half marathon this June with his friends from all over the country. There are no words to describe the positive impact Jim Moore made on the world he leaves behind. Every person that met him is better off for it, and those of us who were close to him have been given an exceptional example of how to live life to the fullest. Jim is survived by sons Chris and Jeff, daughter McKenzie, brother Dennis, sister Beth Ann, and grandchildren Warren, Gavin, Myla, and Aubrie. Visitation will be held on Saturday, February 21, from 10-2 p.m. at the Evangelical Covenant Church in Norway. Funeral Services will be held on Saturday at 2 p.m. at the Evangelical Covenant Church with Pastor James Danielson officiating. Dinner will be available afterwards for those wishing to stay. While flowers are welcome you may instead choose to send a donation to Mountain View Ice Arena in memory of Jim Moore. He had a tremendous passion for the game of hockey and a donation to our local rink would mean a lot to him. Their address is PO Box 126 Iron Mountain, MI. God bless you all.

The family of James Harvey Moore created this Life Tributes page to make it easy to share your memories.

Send flowers to the Moore family.