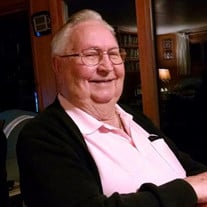 INDIAN RIVER, MI - James "Jim" Thomas Skog, 90, passed away on Sunday, August 13th, 2017 at his home in Indian River, MI. Jim was born in Iron Mountain, MI on July 23, 1927. He was the son of Richard and Marietta (Hawkins) Skog. He was raised Lutheran and he graduated from Vulcan High School in 1947 and joined the Naval Reserves during his senior year of school. In 1951 he married Barbara Bunnell in Minneapolis, MN, they had four children. Jim was employed as one of the original five truck drivers for Smeester Bros. Trucking Company in Iron Mountain in 1963. He retired as an owner/operator in 1988. On August 10, 1985 Jim married Marjorie L. Willett. The couple made their home in Indian River, MI. They enjoyed spending winters in Florida and traveling the United States in their motor home. Marjorie preceded him in death on January 10, 2014. Jim enjoyed farming, gardening, carpentry, hunting, and he loved spending time with his family, especially during the Fourth of July. Jim is survived by his children Jacquelyn (Michael) Gianunzio of Camano Island, WA, Robert (Mary) Skog of Norway, MI, Gordon Skog of Neenah, WI, Jeffrey Skog of Freeport, TX, Michael (Marianne) Willett of Rudyard, MI, and Ann (Roger) Harris of Lapeer, MI, his sister Fern Simon of Green Bay, WI, numerous grandchildren, great grandchildren, nieces, and nephews, and his former wife Barbara (Bunnell) Linsmeyer. He is preceded in death by his wife Marjorie, his parents Richard and Marietta Skog, brothers Maurice Skog and Gordon (Marie) Skog, sister Doris (Roy) Nelson, and brother in law Lloyd Simon. Two separate services will be held for James, the first, a celebration of life that will be held on August 16, 2017 at the Lintz Funeral Home in Indian River, visitation from 1-2pm, funeral at 2pm with Pastor John Wallace. The second service will take place in Norway, MI on August 17, 2017 at the Ortman Funeral Home, visitation from 11am-12:30pm, funeral at 12:30pm with Pastor Jim Danielson. In lieu of flowers, donations should be made to the charity of ones choosing.

The family of James Thomas Skog created this Life Tributes page to make it easy to share your memories.

Send flowers to the Skog family.