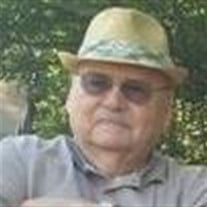 DUNBAR, WI- James Van Overmeiren age 82 of Dunbar, WI. formerly of Norway, MI passed away Saturday, March 24, 2018 at St. Mary's Hospital, in Green Bay, WI. He was born on May 1, 1935 in Norway, the son of the late Francis and Myrtle (Gustafson) Van Overmeiren. Jim had an adventurous childhood, enjoying sports and the outdoors. He played football and graduated from Norway High School. He served his country in the U.S. Army and Army Reserves. After graduation from high school, Jim moved to Milwaukee and worked for the American Can Company for over 32 years, retiring on February 1, 1986. He lived in Sussex, WI until his retirement when he moved to Dunbar, WI, which allowed him to be closer to his parents and spend time in the outdoors. Jim was trained in welding and enjoyed working with metal, wood and automobile engines, he was an avid fisherman and hunter who loved to go camping, taking many fishing and hunting trips throughout Wisconsin as well as to Colorado and Ontario, Canada. Jim was a fan of the Green Bay Packers and Milwaukee Brewers, attending many games from the 1950’s onward. Fan of auto racing and ice hockey, being a coach for youth hockey with the Waukesha County Youth Hockey Association. In his retirement, he enjoyed local high school sports and was awarded a lifetime pass to athletic events at Norway-Vulcan and Beecher-Dunbar-Pembine school districts. Jim is survived by his sons Chris Loomis, Lance Van Overmeiren and James (Joyce) Van Overmeiren, Jr.; daughter Lynn Marie Ash; grandchildren Josh and Luke Van Overmeiren, Chris and Raini Loomis; sister Jean Magnuson; several nieces and nephews. He was preceded in death by his brother Gary Van Overmeiren, and brother-in-law, Bill Magnuson. Family will greet friends on Saturday, April 7 from 10-11 a.m. at Ortman Funeral Home in Norway, MI. A Memorial Service will be held on Saturday, April 7, at 11 a.m. at the Ortman Funeral Home in Norway, with Rev. Irene White, pastor of Grace United Methodist Church, officiating. Interment will be held at the Norway Township Cemetery in the spring. Family request memorial contributions may be made to St. Jude Children’s Research Hospital.

DUNBAR, WI- James Van Overmeiren age 82 of Dunbar, WI. formerly of Norway, MI passed away Saturday, March 24, 2018 at St. Mary's Hospital, in Green Bay, WI. He was born on May 1, 1935 in Norway, the son of the late Francis and Myrtle (Gustafson)... View Obituary & Service Information

The family of James Van Overmeiren created this Life Tributes page to make it easy to share your memories.