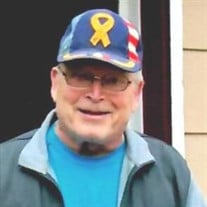 VULCAN – James “Jimmy” L. Watson, 82, of Vulcan, MI passed away Saturday afternoon, February 6th, 2021 at home with family and friends sharing their love and support of their wonderful husband, father, papa/grandpa. He was diagnosed with Alzheimer's Disease approximately 10 years ago and he did not let that slow him down. Previously, he lived in Quinnesec, MI from 1975 – 2014, when he moved to Vulcan. He born in Kansas City, MO and graduated from the local high school. After graduation, James decided to join the Air Force and serve his country. He was stationed at Kincheloe Air Force Base south of Sault Ste. Marie . He also spent time at the Naval Air Station Keflavik in Iceland. He was an Airman Second Class rank when honorably discharged on May 20, 1960. After his time serving our country, James opened his own business, Watson Dry Wall, he operated this for 45 years. Also, with his wife, they operated Jim and Bev's Karaoke business to bring music to others. Survivors include; his wife Beverley Watson, father-in-law Alvin Perry. Children; Joanne Saunders and John Cardamoni, Margo (Robert) Bradley, Brenda (Patrick) Chartier. Step-children; Pamela (William) Revord, Cindy Vivio and friend Tony Campbell, Christine Watson and friend Deb Schicker, Donna (Dennis) Sjoquist. Sister Nancy Cochran. In-laws; Chuck Rohaus, Nancy Perry, Michael (Joni) Perry, Joseph Provencher, Casey Perry, Tracy Perry, Roxane (Mark) Tauschek, Clifford (Cheryl) Perry, Audrey (Shawn) Brown. Many grandchildren, great-grandchildren and a couple on the way. Jim and Bev always referred to all of you are his, hers and mine, we loved you all the same. James loved to call every one of you his “favorite” when you were in front of him. Preceded in death; parents Paul Watson, Alberta Mercer; step-father Bill Mercer, son Marc Watson, siblings; Ronald Watson, Linda Rohaus, Jerry “Jawbones” Watson. In-laws; Donald Cochran, Janette Perry (mother-in-law), Lorraine Provencher, Susan Perry, Jeffrey and Lynne Perry. Also, cousins, nieces, nephews. James loved life to the fullest and laughed a lot with family and friends. A few of his favorite things to do were spending time hunting, fishing, biking and exercising, boating, going to the casino, riding tour buses, making snow angels with Brooke, Mandy, Teri, Jimmy, Tamara, Shannon and Nicholas, riding the Mechanical Bull at Bernie’s Bar, hosting and singing Karaoke. He liked to camp with Tyler, Tim, Tniya, Devin, Nevaeh and Hailey at Camp Appleknockers. His MOST FAVORITE THING was hosting the traditional open house on Christmas Eve, ALL were welcome and many good times were had. If you ask anyone to tell you something about Jim, they would say he loved “going to town”. Something you might not know about Jim is that he had a pilot license and enjoyed the EAA Convention. James life will be celebrated Saturday, May 29 at 12 noon at the Quinnesec Cemetery where there will be military honors. The family would like to give special thanks to the VA Hospital, OSF Hospice Escanaba, Quilters of Zion Lutheran Church, Evergreen Meadows of Norway, Deacon Mike LeBeau, UP Cap Dickinson County, Ortman Funeral Home and if we forgot to mention anyone else please know we appreciated everything you did. In lieu of flowers, donations can be made in memory of James Watson, to the Honor Never Forgotten Honor Flight information can be found at neverforgottenhonorflight.com

The family of James Watson created this Life Tributes page to make it easy to share your memories.

Send flowers to the Watson family.