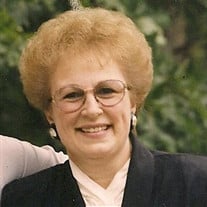 NORWAY- Heaven has gained another angel, as Janet Marie Casanova, age 79 of Norway, died Friday, March 6, 2015 at ManorCare Health Services in Kingsford, MI. She was born in Kingsford on February 14, 1936 the daughter of the late Eugene and Edith (LeBlanc) Rumpf. Jan graduated from Kingsford High School in 1954 and was a graduate of Northern Michigan University as an LPN. On August 3, 1957, she married Donald Casanova of Norway, at American Martyrs Church in Kingsford. They made their home in Norway. Jan worked as a nurse until the first of five children were born. In addition to raising their children, Don and Jan provided foster care for newborn babies through the Catholic Social Services. They never missed a sporting event, school play, dance recital or failed to support a cause that their children were involved in. They later continued to follow their grandchildren’s activities, until Don passed away on May 26, 2005 and Jan’s Alzheimer’s disease had progressed. Her most precious gifts in life were her children and grandchildren. Her faith in the Lord and her family were her priorities. In her earlier years, Jan volunteered in various capacities at St. Mary’s Catholic Church, Holy Spirit School and the St. Vincent dePaul Store in Norway. She was a member of the Altar Society, Women’s Club and Daughters of Isabella. When the children were younger, she was a Bluebird leader and volunteered where needed. After the last of the children graduated, Jan worked for Dr. Peter Marana and was an Avon representative. In her spare time, she dabbled in various art mediums. She cherished the time spent with her art friends and created lovely oil and watercolor paintings. She also enjoyed cooking, ceramics, making homemade crafts and basket weaving. Whether there was a special event, a birthday or someone in need of cheering up, Jan was there with a card, a bakery item, a dinner, balloons or flowers. That act of kindness always included a genuine hug, warm wishes and a gentle smile (most likely, a prayer as well). Those twinkling blue eyes, friendly smile and good nature will be sadly missed by all who knew and loved her. Thank you to her family and friends, who stayed near and dear to her throughout the years of her steadily progressing Alzheimer’s disease. Jan is survived by her five children; Diane (Matt) Westrich, Mark (Kelly) Casanova, Bruce (Mary) Casanova, Tony (Laura) Casanova, Joan (Bruce Pepin) Casanova all living in the area; her 10 precious grandchildren Corinne Westrich, Andrew, Ross, Brooke, Emily, Brenda, Brad and Kayte Casanova, Paul and Erin Angeli; two great-grandsons Blake and Zane Doolan; sister Norma Deyaert; sisters-in-law Judy Casanova and Kathy Rumpf; special uncle Zyg Bonkowski; many nieces, nephews and cousins; along with her God-children Dan Deyaert, Sherry Haakenson and Susan Bovee. Jan was preceded in death by her husband of 47 years, Don; her parents Gene and Edith Rumpf; father and mother-in-law Mike and Vic Casanova; brother Ronald Rumpf; brothers-in-law Wallace Casanova, Roger Casanova and Joe Deyaert. Family will greet friends on Friday, March 27 from 10-11 a.m. at St. Mary's Church in Norway. A Memorial Mass will be celebrated on Friday, March 27 at 11 a.m. at St. Mary’s Church with Fr. Timothy Ekaitis, presiding. Interment will be held at the Norway Township Cemetery. Memorial Contributions may be made in Janet’s name to the Alzheimer’s Association.

NORWAY- Heaven has gained another angel, as Janet Marie Casanova, age 79 of Norway, died Friday, March 6, 2015 at ManorCare Health Services in Kingsford, MI. She was born in Kingsford on February 14, 1936 the daughter of the late Eugene and... View Obituary & Service Information

The family of Janet Marie Casanova created this Life Tributes page to make it easy to share your memories.

NORWAY- Heaven has gained another angel, as Janet Marie Casanova,...

Send flowers to the Casanova family.