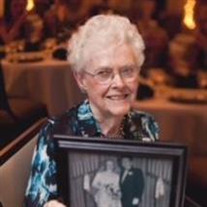 NORWAY- Jean Margaret Gladstone was born in Madison, South Dakota on January 26, 1926 and passed away unexpectedly on March 18, 2018 in Appleton, Wisconsin. She was 92. She was the only child of Otto and Esther (Schutz) Tommeeraason of Madison, South Dakota, later of Norway. While in school she worked at her father’s drug and jewelry store. She graduated from high school in her home town and first attended Monmouth College in Illinois for two years, where she met her future husband, Dr. William Gladstone. She later transferred and graduated from the University of Missouri with a Bachelor’s Degree in Journalism, having gained an interest in journalism after working as the Editor of her high school newspaper. Jean married William R. Gladstone on July 18, 1948 shortly after college graduation and moved to Montreal, Quebec where her husband attended Medical School. She worked in the advertising field there until the birth of her first child Joanne (Jody). The young family eventually moved to Toledo, where daughter Patricia (Patty) was born and then to Wyandotte, Michigan where her husband completed his medical training. They moved to Norway in 1954 when her husband opened his medical practice. Daughters Karen and Kathleen (Kathy) were born at the Old Penn hospital in Norway. She was a faithful Doctor’s wife, homemaker and lifelong learner, enjoying current events and reading throughout her life. She enjoyed following sports and vacationing with her husband. To her last day on earth she lived independently and remained vibrant, staying in touch with family and friends. She loved to bake her famous homemade bread and sugar cookies to bless those she loved. Jean became a Christian at a young age and was a long time member of Bethany Lutheran Church in Norway and later the Good Shepherd Lutheran Church, also of Norway. When she moved to Wisconsin, she attended Christ the King Lutheran Church in Combined Locks, Wisconsin. She is survived by four daughters: Joanne (Lloyd) Borchardt of Wayside, Wisconsin, Patricia (Randy) Middlin of Vassar, Michigan, Karen (Jeff) VanGoethem of Dallas, Texas, and Kathleen (Michael) Sloan of Germantown, MD., 14 grandchildren Tammy Jo (Ross) Buchinger of Appleton, WI, William (Cristy) Borchardt of Kaukauna, WI, Jim (Cheri) Borchardt of Combined Locks, WI, Becky (Matt) Bobber of Appleton, WI, Paul (Rhonda) Middlin of Holt, MI, David (Kimberly) Middlin of Ypsilanti, MI, Thomas (Meredith) Middlin of Freeland, MI, Chaia Huff of Madison, WI, Leah (Joel) Dean of Lincoln, NE, Abigail (Cory) Phillips of Normal, IL, Bethany VanGoethem of Dallas, TX., Melissa (Wil) Morrison of Raleigh, NC, Michelle Sloan of Laurel, MD, Steve Sloan of Germantown, MD, and 22 great grandchildren: Gracie, Cade, Hannah, Carly, Haley, Emma, Ellie, Vivee, Brody, Bentley, Haydon, Eleanor, Carter, Wesley, William, Bella, Lucas, Veda, Miles, Molly, Lincoln, and Carolina. Jean was preceded in death by her parents, her husband (2006) and a sister-in-law Catherine Gladstone. She thought of each grandchild and great grandchild as a special blessing. Family will greet friends on Friday, March 23 from 3-4 p.m. at the Ortman Funeral Home in Norway. A Memorial Service will be held on Friday, at 4 p.m. at the Ortman Funeral Home with Jeff VanGoethem officiating. Interment will be held in the spring at the Norway Township Cemetery. Family request memorial contributions may be made to the William R. Gladstone Scholarship Fund, to be renamed the William and Jean Gladstone Scholarship Fund at Norway High School which annually awards a scholarship to a graduating student anticipating a career in the health field.

NORWAY- Jean Margaret Gladstone was born in Madison, South Dakota on January 26, 1926 and passed away unexpectedly on March 18, 2018 in Appleton, Wisconsin. She was 92. She was the only child of Otto and Esther (Schutz) Tommeeraason of Madison,... View Obituary & Service Information

The family of Jean Margaret Gladstone created this Life Tributes page to make it easy to share your memories.

Send flowers to the Gladstone family.