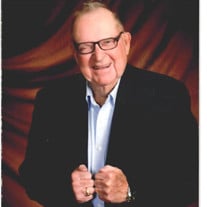 NORWAY- Jerrold “Jerry” Kelly age 90 of Iron Mountain, died Wednesday, November 25, 2020 at Evergreen Meadows in Norway, MI. Jerry was born on April 25, 1930 in Faithorn, son of the late James and Winifred (Hayes) Kelly. He was the third of seven boys and one precious sister. Jerry graduated from Norway High School in 1948. After graduation he left for Milwaukee with his best friend Larry Reid and later the two joined the US Marine Corp together. Jerry served his country during the Korean Conflict and spent an unbelievably cold winter there. After his military service, he attended Marquette University, before returning to Faithorn and bought the family farm. He later joined the US Postal Service as a rural mail carrier, he was proud of his career and especially enjoyed all of the families on his route and knew everyone by name. Jerry proudly served the Postal Service for over 30 years, where he was very active and served as president in the Michigan Rural Mail Carriers Union. Jerry also drove over a million miles to have the honor of being a member of the Million Mile Club. Jerry sold the family farm and moved to Norway, where he was active in the community. He loved being a member of Oak Crest Golf Club, St. Mary’s Church, Knights of Columbus, Vulcan-Norway-Loretto Lions Club and the Floriano-Stecker-Kelly Post #340, American Legion in Hermansville. He treasured time spent at the Rialto bowling with his Tuesday and Friday leagues, where he was known as the “Captain”. Jerry is survived by his five children Jackie Gonsalves, Jane (Jeff) Iglhaut, Terry (Gina) Kelly, Mary Pat (Bob) Madigan and Maureen (Tom) Menard; and their mother Mary Jo Kelly; 10 grandchildren Christina, Jon, Katie, Jordan, Patrick, Marc, Kelly, Chelsey, Dan and Ryan; three great grandchildren. He is also survived by his wife Lorraine Kelly and her children Stephen (Julia) Sigg, Juliann Leveritt, Claudine (Ron) Taub and Katherine (Steven) Cantwell; eleven step grandchildren; 8 step great grandchildren. Also survived by his brothers Tom and Charles Kelly; sister Coleen Strahl; many nieces and nephews. He is preceded in death by his brothers Jim (Kay), Bruce (Delores), Warren and Bob (Donna) Kelly; and son-in-law Philip Gonsalves. Besides family, Jerry’s favorite times were spent in the woods, especially during deer season. Jerry loved everyone he met and called them friend. Someone once gave him a sign describing him and it said, “You are a stranger here but once.” This is a long obituary but so were Jerry’s stories. How we will miss those stories. Visitation will be held on Friday, May 28 from 9:30-11 a.m. at St. Mary's Church in Norway. A Memorial Mass will be held on Friday at 11 a.m. at St. Mary's Church with Fr. Timothy Ekaitis officiating. Interment will follow at Riverside Cemetery in Faithorn. Family suggests that memorial contributions may be made to Holy Spirit School or to Norway-Vulcan School Scholarship Fund.

The family of Jerrold Kelly created this Life Tributes page to make it easy to share your memories.

Send flowers to the Kelly family.