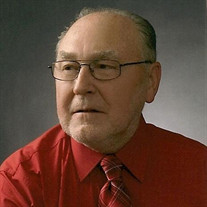 VULCAN- John R. Giuliani age 82 of Vulcan, died Tuesday, July 4, 2017 at Dickinson Co. Memorial Hospital in Iron Mountain, surrounded by his family. John was born March 7, 1935 in Norway, son of the late John and Theresa (LaVoie) Giuliani. Following his graduation from Vulcan High School in 1953, John went to work at Lodal Inc. of Norway which was later relocated to Kingsford. He retired in 2011 after 58 years of employment as a Corporate Secretary - Treasurer and Accounting Manager. John served his country as a member of the 3rd Armored Division from 1958 through 1960, he was stationed at Fort Hood, Texas. He was later assigned as a Personnel Specialist for the 503rd Aviation Company deployed in Germany. There he attained the rank of Army Specialist (E-4). In his earlier years, John was a member of St. Stephens Parish of Loretto and later St. Barbara’s of Vulcan. As a member of the pastoral council, John was president for several years. He was a longtime member of the choir where he served as cantor, greeter and lector. As a Eucharistic Minister, he made routine visits to shut-ins. He served many years as the parish Environmental Director as well as serving on the Finance council. Under the leadership of Henry London and Richard Bedard, John became a 4-H member at the age of 8. He served on the local 4-H council for many years and was the state president for a year. As a 4-H leader for nearly 30 years, he inspired many youth. John owned and operated Giuliani’s Greenhouse of Lower Pine Creek near Vulcan, MI for over 25 years. Arranging flowers for special occasions such as weddings, Memorial Day and Christmas brought John much joy and satisfaction. Spring was a busy time of the year as he provided many seedlings for area gardeners. Known for his subtle sense of humor, John was a dignified, humble and gracious man who blessed the lives of those he met along his life journey. Throughout his lengthy battle with cancer, John consistently maintained a positive outlook which was an inspiration to many. He is survived by his sister-in-law Lois Ann (Hulce) Giuliani; nephew Paul Giuliani; nieces Debbie (Greg) Vargo, Lori (Stephen Way) Giuliani, Denise (Mike) Fayas, Brenda Phare, Karen (Todd) Bishop, and Lisa (Robert) Schwamlien; special friend Rev. Fr. John Martignon and several great and great-great nieces and nephews; and many friends. He was preceded in death by brothers, Lawrence, Ernie and David Giuliani and also nephews Sgt. Scott Giuliani and infant David Paul Giuliani. Visitation will be held on Friday, July 7 from 4-7 p.m. at the Ortman Funeral Home in Norway. A rosary will be recited at 6:30 p.m. at the Funeral Home. The Mass of Christian Burial will be celebrated on Saturday, July 8 at 10 a.m. at St. Barbara’s Church in Vulcan with Fr. Timothy Ekaitis officiating and Fr. John Martigon and Fr. Paul Nomelini concelebrating. Interment will follow at the Norway Township Cemetery.

The family of John Robert Giuliani created this Life Tributes page to make it easy to share your memories.

Send flowers to the Giuliani family.