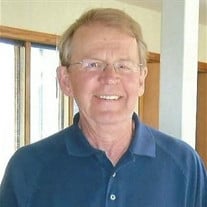 NORWAY- John W. Kivisaari, 72, of Norway, died Thursday, October 20, 2016 at the University of Wisconsin Hospital in Madison, Wisconsin. He was born on May 15, 1944 in Marquette to the late Wilho and Lempi (Maki) Kivisaari. In 1951, John’s family moved to Norway, which remained his hometown for the rest of his life. John graduated from Norway High School in 1962 before serving in the U.S. Army in San Francisco and Germany during the Vietnam War. After his service, John graduated from Northern Michigan University. He worked in the wholesale grocery industry for many years as a purchasing agent and assistant manager with Northland Grocers, and later as a salesman and merchandiser for Kraft Foods. While attending NMU, John met his wife, Wendy (Guldswog). On April 5, 1974, under overcast skies, they were married at St. Mary’s Church in Norway, surrounded by family and friends. John enjoyed a quiet life of happiness and serenity, finding both in his family and loved ones. He lived humbly, and received joy not from material things, but in life’s simple pleasures: the stillness of the morning while sipping a hot cup of coffee, the wind blowing through the oak trees on the golf course, the smell of soil and freshly-cut grass as he and Wendy worked together in their garden, watching University of Michigan football games with his son, and the unconditional love and support from Wendy. John is survived by Wendy, his wife of 42 years; son, John C. Kivisaari of Madison, WI; brother, Peter (Cheryl) Kivisaari of Norway; sister-in-law, Karen D. Guldswog of Iron Mountain; brother-in-law, Donald H. Hinds of Norway; and several nieces, nephews and cousins. Visitation will be held on Tuesday, October 25 from 11- 1p.m. at Good Shepherd Lutheran Church in Norway Funeral Services will be held on Tuesday at 1 p.m. at Good Shepherd Lutheran with Rev. Dr. Michael J. Langlais officiating. Interment will be held at the Norway Township Cemetery.

The family of John William Kivisaari created this Life Tributes page to make it easy to share your memories.

Send flowers to the Kivisaari family.