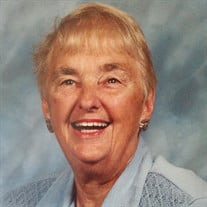 CHANNING- Joy Lillian Carey age 88 of Channing, passed away Friday, June 1, 2018 at the Iron Co. Medical Care Facility in Crystal Falls, MI. Joy was born on January 10, 1930 in Chicago, the daughter of Swedish immigrants Eric and Lillian Erickson, and lived near Wrigley field until she was 12 years old. Her father worked for the Milwaukee Road Railway Company and during World War II he decided to transfer his job and family to Channing in fear of Germany attacking the Great Lakes Naval Training base near where they lived. Growing up and living in Channing, Joy graduated from Channing High School and worked for a short time at the Channing Post Office. After WWII was over she met Charles “Totsy” Carey after he returned from the war, they married on August 13, 1949 and began their life living on a farm on Turner Road in Channing. Together they raised four children and while their children were growing up the farm flourished. Joy was involved in the operation of the family farm working daily in the warehouse grading potatoes throughout the winter months in addition to making sure her family was well fed, she made countless loaves of bread. Joy was involved in many things, serving on the board of the Dickinson County 4-H council and was also active in Grace Presbyterian Church in Sagola where she loved to sing in the choir and visit with her friends. Joy also served as the secretary for the Iron Range County Farm Bureau for many years. Joy was a sports fan, enjoying watching her grandchildren whenever she could. She followed the Chicago Cubs and the Chicago Bulls on TV and she always said Dennis Rodman was her favorite player. It was a special thrill when she and Mimi saw him play in Florida. She was happy when the Cubs won the World Series in 2016. Joy was able to do some traveling over the years, she and Totsy vacationed in Hawaii and also traveled to Sweden to visit her relatives. After retirement she and Totsy wintered in Florida for several seasons and after Totsy died in 1996 she stayed with her daughter “Mimi” at West Palm Beach for several seasons as well. They also took many American road tours with their longtime friends and traveling companions Fabian and Luella Steinbrecher. Heaven gained another soul and the world lost another of “The Greatest Generation”, God speed, Joy L. Carey She is survived by her four children Colleen (Tom) Carlson of Norway, Maureen “Mimi” Carey of Iron Mountain, Kim Carey of Channing, and Patrick (Lorna) Carey of Channing; eight grand children Grant (Lisa) Carlson, Eric (Dana) Carlson, Jennifer Carlson, Erica Carey, Stephanie (Juan Mayfield) Carey, Hannah (Taylor) Hicks, Parker Carey, and Grace Carey; six great grand children Kylee Carlson, Paytan Carlson, Ashley Carlson, Emily Carlson, Colt Hicks, Reid Hicks, Jaxon Mayfield; brother, Roy (Tammy) Erickson of Florida; sister JoAnn Tidquist of Wisconsin; many nieces and nephews. Preceded in death by her husband Charles D. “Totsy” Carey Family will greet friends on Saturday, June 9 from 10-12 p.m. at the Grace Presbyterian Church in Sagola. A Memorial Service will be held on Saturday at 12 p.m. at the Grace Presbyterian Church with Pastor Ryan Flunker officiating. Interment will be held at the Channing Cemetery. Family suggests that memorial contributions may be made to the Grace Presbyterian Church.

The family of Joy Lillian Carey created this Life Tributes page to make it easy to share your memories.

Send flowers to the Carey family.