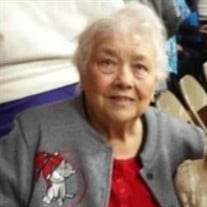 NORWAY- Laura Jean Flessati age 96 of Norway, was called to the Lord’s side on Monday, December 13, 2021 at the Pine Grove division of Pinecrest Medical Care Facility in Powers, MI. She was born May 1, 1925 in Norway, the daughter of the late Frank and Martha (Cremer) Tavis. Laura lived on the “Farm” in lower Pine Creek until she married the love of her life Joseph E. Flessati on October 31, 1942 in St. Stephen’s Church in Loretto. He preceded her in death on April 29, 1988. In their 45 years of marriage Joe and “Wow” as he called her, raised five children. During Laura’s 96 years, she did not allow any grass to grow under her feet. She loved to travel and enjoyed camping. She was a member of St. Barbara’s Church in Vulcan, St. Anne’s Alter Society, Norway Vulcan Women’s Club, Norway Vulcan Senior Center, a 4-H Leader, and a member of the American Legion Auxiliary. Laura loved to attend her grandchildren’s sporting events and country music; Charlie Pride was her favorite. She was once crowned “Potato Queen” at a Farmer’s Festival and also a huge John Wayne fan. The thing she enjoyed most was spending time with her great grandchildren, her face lit up when they visited. In her later years, Laura looked forward to Family Ties adult day care. Laura was a very strong-willed women, but always had a soft spot in her heart for family. Her mind was sharp as a tack, and remembered things from her childhood. She was a wealth of information for her family and could answer any questions they had. Laura is survived by her sons David (Cheryl) Flessati of Pioche, NV and Bob (Tammy) Flessati of Norway; daughters Nancy Farley and JoAnn Arnold both of Norway; 11 grandchildren; 16 great grandchildren; 6 great great grandchildren and special nieces Debbie, Karin and Sandy. She was preceded in death by her daughter Marie Belanger; grandson Tim Flessati; great granddaughter Michelle Withers; sons-in-law Norbert Farley and Robert Belanger; and brothers Jerry and Alfred Tavis. Family would like to Thank, the nurses and staff at Pine Grove for all the wonderful care they gave to Laura during her time there. Visitation will be held on Friday, December 17 from 9-11 a.m. at St. Barbara’s Church in Vulcan. Mass of Christian Burial will be celebrated on Friday at 11 a.m. at St. Barbara’s Church with Fr. Marty Flynn officiating. Interment will follow at the Norway Township Cemetery.

NORWAY- Laura Jean Flessati age 96 of Norway, was called to the Lord&#8217;s side on Monday, December 13, 2021 at the Pine Grove division of Pinecrest Medical Care Facility in Powers, MI. She was born May 1, 1925 in Norway, the daughter of... View Obituary & Service Information

The family of Laura Flessati created this Life Tributes page to make it easy to share your memories.

NORWAY- Laura Jean Flessati age 96 of Norway, was called to the...

Send flowers to the Flessati family.