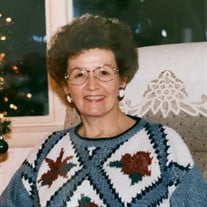 NORWAY- LaVerne J. Baril-Solda age 91 passed away Tuesday, November 24, 2020 at Evergreen Meadows Assisted Living in Norway, MI. She was born on June 17, 1929 in Norway, the daughter of the late Albert and Edna (VanDamme) Johnson. LaVerne graduated from Vulcan High School in 1947. She attended Northern Michigan University earning a State Limited Certificate and began a teaching career. In the years that followed she earned her bachelor’s degree, followed by a master’s degree in special education. LaVerne married Lawrence Baril on August 8, 1952 at St. Barbara’s Church in Vulcan. He preceded her in death in 1978. She retired from Norway-Vulcan Area Schools in 1986 having taught for 32 years. Following retirement, she served on the Norway-Vulcan School Board for 8 years and Dickinson -Iron Intermediate School Board for 12 years. Having a special needs daughter, she directed much effort to improve the lives of special needs citizens. A charter member of Memorial Hospice, serving as a volunteer and as an officer. A lifetime member of the Michigan Education Association, and the National Education Association, and the Michigan Public School Employees Retirement System. A member of St. Mary’s Church and Oak Crest Golf Club in Norway. She married Gelindo “Geno” Solda on October 4, 1997 at St. Mary’s Church in Norway. LaVerne is survived by her husband Geno; daughters Linda Baril of Kingsford, LuAnne (James) Batti of Kingsford and Laurie (Brian) Whear of Iron River; sons Lee (Pam) Baril of Eau Claire, WI and Michael (Kristi) Solda of Norway; nine grandchildren; seven great grandchildren; brother Ken Johnson; sisters-in-law Marie Johnson, and Corky Johnson; many nieces and nephews. She was preceded in death by her infant daughter Lois; brothers Roland and Ernest Johnson; and sisters-in-law Marilu Johnson and Joan Johnson. Interment will be held now at the Norway Township Cemetery. A Memorial Mass will be celebrated at St. Mary’s Church in the spring. The family would like to extend a special Thank You to all staff at Evergreen Meadows Assisted Living. Family suggest that memorial contributions may be made in LaVerne’s name to Evergreen Meadows.

The family of LaVerne Baril-Solda created this Life Tributes page to make it easy to share your memories.

Send flowers to the Baril-Solda family.