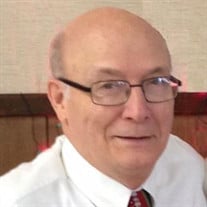 NORWAY- Lee Raymond Meneghini age 77 of Norway, passed away Monday, January 4, 2021 after a courageous battle with COVID-19 at the Zablocki VA Medical Center in Milwaukee, WI. Lee was born September 3, 1943 to Edwin and Dorothy (Awerdick) Meneghini in Laurium, Michigan and graduated from Norway High School with the class of 1961. Lee enlisted in the US Army and served in the Vietnam War. Upon returning, he worked at Vertin’s Department Store, the City of Norway, the Niagara paper mill for 29 years and then part-time in retirement at Lofholm’s Building Center and Ortman Funeral Home. Lee’s life can be summarized in four passions; Faith, Community, Country and Family. Faith. Lee was a lifelong member of St. Mary’s Catholic Church of Norway and served at various times as a eucharistic minister, an usher and a member of the Parish Council. Country. Lee served in the Vietnam War with the 101st Airborne Division and was honorably discharged in December 1966. He received numerous service badges and medals for his time in the Service. He was a lifetime member of Norvulet VFW Post #4581 and the Hall-Dewinter Post #145 American Legion where he frequently assisted with Sunday morning breakfast. On many 4th of July and Memorial Day parades he often entered a float showing his support of fellow veterans. Community. Lee was very active within the Norway community his entire life. He served on the Norway City Council for 15 years and on various boards including the Planning Commission, the Jake Menghini Museum, the Senior Center, Parks and Recreation and the Zoning Board of Appeals. He also was a 21 year member of the Norway Volunteer Fire Department. Lee was an avid Norway Knights fan, along with Marge, they were often seen at numerous sporting events at home and away games. They received the Fan of the Year in 2016 from the Norway Knights Booster Club. Family. Lee had a large extensive family. He is survived by his loving wife of 50 years Marge (Bal) Meneghini. Lee and Marge had three sons: Paul (Carla) of Duluth, Minnesota, Rico (Amanda) of Norway, Michigan and Lucas (Vivian) of Austin, Texas. Lee was very proud of his boys. He was a proud papa and blessed with seven grandchildren: Charlotte, Kasey, Carson, Marco, Milo, Mario and Chiamara that truly made his heart sing. He is survived by siblings: Lynne (Charles) Wiethoff, Monica (Allan) Erickson, Beth Ann “Boofer” Anderson, Elise (Richard) Hermsen, Neil (Karen) Meneghini, Mark (Pam) Meneghini and in-laws: Maxine Meneghini, George (Betty) Bal, Marie Devine, Marie Bal, Joan Bal, Bernice Bal, Janice Tinti, Joan Tinti, Larry (Sue) Tinti, Patsy (Bill) Zanona and numerous nieces and nephews, cousins and friends. He was preceded in death by: his parents and brother Dennis Meneghini, in-laws; George Anderson, Robert Devine, Edward “Edgie” Bal, Walter Bal, John Bal, Joseph “Tata” Bal, Ernest Tinti, George Tinti, Marjorie Bal and Rae Tinti. He was an avid runner for 35 years and on weekends would travel across the UP and northern Wisconsin to participate in races. The most anticipated time of the year was the annual Norway Spring Classic. He would often be seen jogging along US 2 in his colorful running gear. But, he was most at comfort in his backyard gathering firewood and hosting bonfires with neighbors, friends and family and sharing a cold Silver Bullet and a good laugh. When he wasn’t running, he would often be having coffee with the guys, challenging any and all to a game of cribbage and expressing his frustrations of the futility of the Detroit Lions. His wit and sense of humor will be missed by all. Lee’s family would like to thank the doctors and nurses who provided him care over the past 6 weeks at the Oscar G. Johnson VA Medical Center in Iron Mountain and the Zablocki VA Medical Center in Milwaukee. In lieu of flowers and because of Lee’s passion and commitment to local youth sports, the family will be making a donation to the NVAS Athletic Booster Club. Visitation will be held on Friday, July 9 from 9:30-11:30 a.m. St. Mary's Church in Norway. A Memorial Mass will be held on Friday, at 11:30 a.m. at St. Mary's Church. Interment will follow at the Norway Township Cemetery.

The family of Lee Meneghini created this Life Tributes page to make it easy to share your memories.

Send flowers to the Meneghini family.