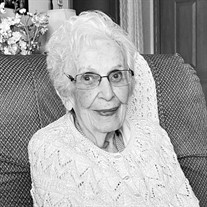 NORWAY- Lenore J. Soderlund, 98, left her earthly home to be with her Savior on Thursday, May 12, 2022 at Evergreen Assisted Living in Norway, MI. Lenore was born in Flint, Michigan on March 19, 1924, the daughter of the late Harold and Nancy (Soderbeck) Nyberg. Her family moved back to their roots in Norway, when she was still a baby. Lenore graduated from Norway High School in 1941, and continued her education at Dundon’s Actual Business College in Iron Mountain, MI. She worked as a bookkeeper for the Iron Mountain News until June 12, 1948 when she married Irving “Bing” Soderlund at the Covenant Church in Norway. While Bing finished his education at Northern Michigan University, the newlyweds lived in “Vetville” on the campus of NMU. Lenore worked for the Red Cross in Marquette at that time. They were married for 63 years when Bing died on December 12, 2011. Lenore was a talented organist/pianist, using her talents to accompany choirs and congregations at the Covenant Church in Norway for 75 years. She lived her faith, and her family and friends were so blessed to have her gentle, caring presence for 98 years. Along with spiritual food, Lenore always concerned her self with making sure her people had enough Swedish meatballs, mashed potatoes, and sweet treats from the bottom drawer. Lenore is survived by her children, Beth (Rich) Henrion of Norway, Nancy (Ray Spitz) Zelman of Hartford, WI, and Charles “Chuck” (Michelle) Soderlund of Darwin, MN. She is also survived by 9 grandchildren, Kristin (Evan) Rice, Stacy (Chad) Harrison, Mark (Cali) Henrion, Jeremy (Rachel Jane) Zelman, Megan (Jordan) VanOort, Steven (Emily) Soderlund, Melanie Soderlund, Annika Soderlund, and Andrew Soderlund, and 10 great-grandchildren, Gray, Reed, and Miles Harrison, Emmett and Elise Rice, Calvin, Hans, and Lenore VanOort, and Henry and Hugo Soderlund. She is also survived by her sister, Joyce Fredrickson, of Santa Barbara, California, as well as several nieces and nephews. Lenore’s happiest moments were when she was rocking babies, and those grandchildren and great-grandchildren adored her. Lenore was preceded in death by her husband, parents, brothers, Milton and Donald Nyberg, son-in-law, Aaron Zelman, and grandson, Erik Zelman. Family will greet friends on Monday, May 23, from 11-1 p.m. at the Evangelical Covenant Church in Norway. A memorial service will be held at 1 p.m. the Evangelical Covenant Church with Pastor Jim Danielson officiating. Interment will be held at the Norway Township Cemetery. The family wishes to sincerely thank Dr. Paul Hayes and the staff at Evergreen Meadows Assisted Living for the kind care Lenore received through the years. To Pastor Jim Danielson and so many others who visited or sent cards to Lenore, the family thanks you.

NORWAY- Lenore J. Soderlund, 98, left her earthly home to be with her Savior on Thursday, May 12, 2022 at Evergreen Assisted Living in Norway, MI. Lenore was born in Flint, Michigan on March 19, 1924, the daughter of the late Harold and Nancy... View Obituary & Service Information

The family of Lenore Soderlund created this Life Tributes page to make it easy to share your memories.

Send flowers to the Soderlund family.