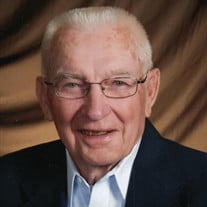 VULCAN- Leonard F. Bal, age 90 of Vulcan, died Sunday, November 14, 2021, at Dickinson Co. Memorial Hospital in Iron Mountain, MI. He was born September 16, 1931 in Vulcan, the son of the late Frank and Stephanie (Gnody) Ball. Leonard graduated from Vulcan High School in 1950. He joined and served his country in the US Air Force from November 1950 until his retirement in November 1972. During his time of service, Leonard distinguished himself by serving in the Korean Conflict and during the Vietnam Era. Leonard married Betty Chiesa on June 16, 1956 at St. Mary’s Church in Norway. She preceded him in death on November 4, 2021. After his service in the Air Force, he worked for UP Electric for many years. After he retired his dedication to his community continued by being County Commissioner, and Norway Township Supervisor, where he served on many committees and boards. Leonard enjoyed hunting, fishing and camping with his family, especially his grandchildren. He was very active in Boy Scouts and enjoyed traveling. Leonard is survived by his son Lenny (Kris) Bal of Hamilton Lakes; daughters Annette (Scott) Meiner of Powers and Michele (Tom) Haferkorn of Vulcan; grandchildren Michael (Sarah) Bal, Jessica Bal, TJ (Alexa) Haferkorn, Mandy (Kyle) Larson, Nick Haferkorn and Justin (Kenzie) Meiner; great grandchildren Zoey, Logan, Kyle and Abby Bal and Ellie Meiner; sister Helen Rossato of Vulcan; sisters-in-law Jackie (Mike) Boyer of Starks, WI and Sandra Chiesa of Menominee; many nieces and nephews. He was preceded in death by his sisters Beatrice Zychowski and Evelyn Luba; brothers-in-law John Baciak, Zygmund Zychowski, Adolph Rossato and Clyde Chiesa. Visitation will be held on Friday, November 19 from 9-11:00 a.m. at St. Barbara’s Church in Vulcan. The Mass of Christian Burial will be celebrated on Friday at 11:00 a.m. at St. Barbara’s Church with Fr. Marty Flynn officiating. Interment will follow at the Norway Township Cemetery. Family request that Memorial Contributions may be made in Leonard and Betty’s names to the Herma Heart Institute on their great granddaughter Abby Bal’s behalf.

The family of Leonard Bal created this Life Tributes page to make it easy to share your memories.

Send flowers to the Bal family.