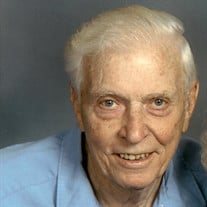 NORWAY- Leslie John Lovato, age 93, of Norway, passed away Monday, January 25, 2016 at the ManorCare Nursing Facility in Kingsford, MI. Leslie was born on October 8, 1922 in Norway, the son of the late John and Mary (Noletti) Lovato. He spent much his youth working on the Morosini family farm, his grandmother’s family farm. Les graduated from Norway High School in 1941. He joined the US Navy and was in Naval Air Corp during World War II. Upon his return from service, Leslie worked for Burroughs in Detroit. He then moved back to Norway where he worked at Asselin's Creamery where he met Theresa Corozolla. Leslie married Theresa Corozolla on September 16, 1950 in St. Mary's Church in Norway. He and his "Buddy", Theresa, were inseparable for 55 years; she preceded him in death on July 17, 2005. Leslie was employed as an electrician at Paul Electric Company of Iron Mountain. He retired after 33 years as a master electrician. Leslie loved to hunt and enjoy his time at the hunting camp with family and friends. He was very proud of his children and grandchildren and enjoyed attending their various games and other activities. He could always be counted on to help his kids with their household projects. He will be greatly missed. He is survived by his son Joseph (Rebecca) Lovato of Grand Ledge, David (Kathrine) Lovato of Dunbar, WI., Richard (Audrey Eiche) Lovato of Vulcan; daughter Kathleen (Larry) Gagnon of Vulcan; grandchildren Michelle (Steven) LaBonte of Wilson, Melanie Lovato of Howard, WI and Misty (Josh) Giese of Green Bay, WI, Michael (Eva Rogers) Lovato of San Francisco, Ca., Miranda (Mathew Close) Lovato of Chicago, Jessica (Adam) Marquardt of Rochester, MN., and Brittany Gagnon of Ashland, OR ; great grandchildren Brent and Zoe LaBonte, Landon Gagnon; Lauren, Andrew and Charlie Marquardt, and Martha Close. He was preceded in death by his wife Theresa (Corozolla) Lovato and brother William Lovato. Visitation will be held on Friday, January 29 from 4-7 p.m. at Ortman Funeral Home in Norway. A Memorial Mass will be celebrated on Saturday, January 30 at 9:30 a.m. at St. Mary’s Church in Norway, with Fr. Timothy Ekaitis presiding. Interment will be held at Norway Township Cemetery in the spring. The family request that memorial contributions may be made to Family Ties, 1238 Carpenter Ave., Iron Mountain, MI 49801.

NORWAY- Leslie John Lovato, age 93, of Norway, passed away Monday, January 25, 2016 at the ManorCare Nursing Facility in Kingsford, MI. Leslie was born on October 8, 1922 in Norway, the son of the late John and Mary (Noletti) Lovato. He spent... View Obituary & Service Information

The family of Leslie John Lovato created this Life Tributes page to make it easy to share your memories.

Send flowers to the Lovato family.