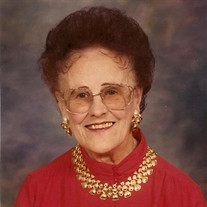 NORWAY- Lucille B. (Giacherio) Marcell age 101 of Norway, died Friday, March 9, 2018 at Evergreen Meadows Assisted Living in Norway, MI. She was born on April 1, 1916 in Assumption, IL, the daughter of the late Peter and Rose (Stanker) Giacherio. The family moved to the Norway area when Lucille was very young, she attended what is now the Norway-Vulcan Area school. As a young woman Lucille worked at the Milliman Hotel, later known as the Dickinson Hotel and for private families in the area. She married Arthur J. Marcell on November 9, 1940 in St. Barbara’s Church in Vulcan and they had 45 years together until he was taken to our Lord on October 14, 1985. Her family was very proud of her as she carried on after his death for 28 years in the home which was built by Art and one of Lucille’s brothers. With Art, Lucille enjoyed following their son in his sports endeavors, snowmobiling, snowshoeing and spending time at camp with her husband and with the whole family on Thanksgiving. Later she loved going on casino bus trips, attending functions her grandchildren were in, and her Christmas shopping trips with all her daughters. She was a member of St. Mary’s Church in Norway. Lucille is survived by her son Arthur Marcell, Jr. of Suamico, WI.; daughters Charlene (Thomas) McCarthy of Norway, JoAnne (Glenn) Pearson of Gladstone and Jean Anne (James) Bonetti of Neenah, WI.; 6 grandchildren Mark McCarthy, Maribeth (Kevin) Braspennickx, Pamela (Dave) Westphal, Mindy (Andy) Mokszycke, Brianna Bonetti and Melanie Bonetti; 4 great grandchildren Bryce and McKenna Braspennickx, Hunter McCarthy and Madelyn Westphal; special niece Rosemary Haepers, along with other nieces and nephews whom she loved hearing from. Besides her parents and husband, she was preceded in death by her brothers Clarence, Ernest “Shady”, William “Sonny” Giacherio, and by 2 infant brothers; sisters Evelyn DeGroot and Lenore Waeghe. The family thanks the staff at Evergreen Assisted Living and Memory Care for the care, comfort and love given to Lucille while she was a resident there. Family will greet friends on Monday, May 7 from 10-11 a.m. at St. Mary’s Church in Norway. A Memorial Mass will be celebrated on Monday, May 7 at 11 a.m. at St. Mary’s Church with Fr. Timothy Ekaitis presiding. Interment will be held at the Norway Township Cemetery.

NORWAY- Lucille B. (Giacherio) Marcell age 101 of Norway, died Friday, March 9, 2018 at Evergreen Meadows Assisted Living in Norway, MI. She was born on April 1, 1916 in Assumption, IL, the daughter of the late Peter and Rose (Stanker) Giacherio. The... View Obituary & Service Information

The family of Lucille B. (Giacherio) Marcell created this Life Tributes page to make it easy to share your memories.

Send flowers to the Marcell family.