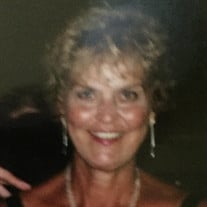 HAMILTON LAKES- Margaret "Peggy" Bryson age 75 of Hamilton Lakes, passed away, Sunday, December 2, 2018. Peggy’s writing career was fashioned around a passion for truth in journalism, matched by a flair for storytelling and genuine interest in others. But even more than she loved writing and was recognized for her success, Peggy treasured her family and excelled at being a wife mother and cherished friend. She was always quick to laugh and never took herself too seriously. As both a reporter and a friend, she had a great “nose for baloney”- a knack for cutting to the heart of the matter with both humor and grace. For years she played bridge regularly and each March would run a NCAA March Madness pool. She upset many basketball fans with repeat wins in her pool by picking teams based on her favorite mascot names, uniform colors, or Catholic origin. She was born on June 13, 1943 in Nashota, Wisconsin, the daughter of the late Lester and Mildred (LaCount) Munson. Peggy graduated from Marinette Catholic High School in 1961, and attended Mount Mary and Northern Michigan University. She married Richard “Dick” Bryson on April 4, 1964 at St. Joseph's Church in Escanaba. Peggy worked for WDBC and WLST radio, Mead Paper Company, the Daily Press which she started as a reporter and became the Editor in Escanaba. After her retirement from the Daily Press she worked for, OSF St. Francis Hospital and was the Host for over a decade of the TV show "Spotlight on Health". Peggy was a member of the St. Barbara's Catholic Church, past member of the Norway-Vulcan School Board, Hamilton Lakes Association, St. Vincent DePaul, Welcome Wagon hostess and the first woman to be asked to join the Folo Forum in Escanaba. She is survived by her husband of 54 years Richard; her sister Barbara Oshesky of Florida; sisters-in-law Sharon (Dave) Rivard and Debbie (John) Clairmont; daughters Betsy Morley of Traverse City, Heidi (Todd) Teafoe of Vulcan, Holly Adcox of Hamilton Lakes and Jessica (Greg) Stewart of Hamilton Lakes; grandchildren Samuel and Madelyn Morley, Brooke Teafoe, Sierra and Bryson Gonzales, Abby Adcox, Courtney (Brian) Krabbe, Cole (Skyler) Teafoe, Ashley (Travis) Mattson and Adam Stewart; great grandchildren Amara, Braxton, Hudson, Dylan, Ellie, Coralie and Parker; many nieces and nephews. Peggy was preceded in death by her parents, sister Sonja Helm, brother Charles Munson, nephews Jerry and Danny Oshesky, niece Jalyn Busa and son-in-law Daniel Morley. Visitation will be held on Thursday, December 6 from 9:30 to 11:30am CST at the Ortman Funeral Home in Norway. Mass of Christian Burial will be celebrated on Thursday at 12 p.m.CST at St. Barbara's Church in Vulcan, with luncheon to follow in church basement with Fr. Timothy Ekaitis officiating.

The family of Margaret "Peggy" Bryson created this Life Tributes page to make it easy to share your memories.

Send flowers to the Bryson family.