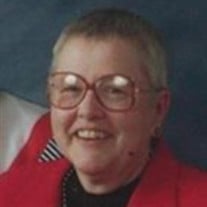 NORWAY- Peg Stauber was born on October 26, 1949, the daughter of the late Joseph “Bud” and Marion (Huth) Stauber. After attending the Norway-Vulcan Schools, Peg attended St. Scholastica College in Duluth, MN and later Cardinal Stritch College in Milwaukee, WI where she received her Bachelor’s Degree in the area of Special Education. Following college, Peg devoted her life to Special Education, working and touching the lives of innumerable disabled people. She later earned her Master’s Degree at the University of Wisconsin-Eau Claire. Peg taught various groups of Special Education students in Manitowoc, New Holstein, and Pembine, WI as well as in Gladstone, MI. Peg was also a CCD teacher at St. Anthony’s after her retirement from teaching. Peg was a very dedicated Teacher as well as an advocate for students with disabilities and their families. She managed a camp for the Handicapped in Wisconsin for several years, enriching the lives of individuals with various disabilities Peg died November 3, 2020 of the Covid-19 virus. She is preceded in death by both of her parents, Mr. and Mrs. Joseph (Bud) Stauber as well as her older sister Jean. She is survived by two sisters, Mary Jo Stauber and Janet (George) Godlewski both of Northumberland, PA and two nephews and their families, Aaron (Cassie) Godlewski also of Northumberland and Matthew (Meredith McCormick) of Townsend, DE. Peg was an avid crafter. She enjoyed sewing, embroidery, quilting and card playing with friends and family as well as baking. She was a member of St. Mary’s Church in Norway as well as St. Anthony’s in Niagara, WI. The family will greet friends Wednesday, July 21 from 10-11 a.m. at St. Anthony’s Catholic Church in Niagara. A Memorial Mass of Christian Burial, a celebration of Peg’s life will be celebrated on Wednesday at 11 a.m. at St. Anthony’s Catholic Church. Peg’s Family would really like to know how she touched your lives. Please do so by sending condolences to the family. In lieu of flowers, please make a memorial contribution in honor of Peg to your favorite charity.

The family of Margaret "Peg" Stauber created this Life Tributes page to make it easy to share your memories.

Send flowers to the Stauber family.