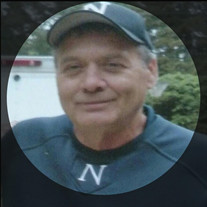 VULCAN- Michael P. Maule age 64 of Vulcan, died unexpectedly, Thursday, April 26, 2018 at Dickinson Co. Memorial Hospital in Iron Mountain, MI. He was born December 24, 1953 in Norway the son of the late George and Sylvia (Luft) Maule. Mike graduated from North Central High School in 1972 and played football at Ferris State until an injury ended his college career. Mike was an assistant football and basketball coach at North Central for many years, and was on the coaching staff for the State Championship Team in 1984. Mike also coached basketball and baseball in Norway, from Little League to High School, there wasn’t a kid in the community that didn’t get advice or pointers from Mike on how to play baseball. He has been the assistant varsity boy’s baseball coach for Norway for the past 8 years. He was a member of St. Mary’s Church in Norway, an avid sports fan, enjoyed hunting and spending time with this family, especially his grandchildren. Mike worked at Lofholm Lumber since July 1984, as Vice President of Contractor and Project Sales, and as a estimator and sales person. He is survived by his daughters Michelle (Aaron) Clark and Cindy (Rick) Mick; step-son Alec Steadman; grandchildren Joe, Layla, Tom, Mady, Bree, Andie and Ella; brothers and sisters George (Barb) Maule, Jr., Debbie (Mark) Sablich, Tom (Sally) Maule, Bob (Connie) Maule, Steve (Debbie) Maule, Kathy (Ed) Belaire, Jeff (Corrie) Maule, Greg (Lori) Maule, Sue Hixon, Doug (Kim) Maule, Keith (Angie) Maule, Chuck (Audrey) Maule and Dan (Connie) Maule; many nieces and nephews. Mike was preceded in death by his brother Ron Maule. Visitation will be held on Monday, April 30 from 4-8 p.m. at the Ortman Funeral Home in Norway. Parish Prayers will be held at 7:30 p.m. The Mass of Christian Burial will be celebrated on Tuesday, May 1 at 10 a.m. at St. Barbara’s Church in Vulcan, with Fr. Binu Joseph officiating. Interment will be held at the Meyer Township Cemetery.

The family of Michael Peter Maule created this Life Tributes page to make it easy to share your memories.

Send flowers to the Maule family.