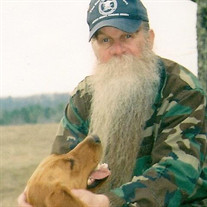 VULCAN- Michael “Pinky” Pientkewic age 66 of Vulcan, went to be with the Lord on Tuesday, January 23, 2018 at the Oscar G. Johnson V.A. Medical Center in Iron Mountain, MI. He was born on May 17, 1951 in Norway, the son of the late Martin and Marjorie (LaPorte) Pientkewic. After graduating from Norway High School in 1969, he enlisted in the U.S. Army. He served his country in South Korea and Berlin, Germany and was honorably discharged in 1972, with the rank of SPC/5. Mike loved the outdoors and enjoyed hunting, trapping and fishing in his younger years. He called himself a lumberjack, working for local loggers as a piece cutter. He was known for his concern of our natural resources, especially the woods, and a job well done. Mike watched and fed the wildlife in his back yard, especially the birds and the deer. He volunteered at Holy Spirit School for over 30 years, was a life patron member of the NRA and a Golden Eagles member. Mike cared deeply about our 2nd Amendment rights to bear arms. Mike is survived by the love of his life Therese Nowack; brother James (Jeanette) Pientkewic of Elderon, WI; sister Rosemary (Warren) Gianunzio of Norway; nephews Wayne (Karen) Gasbarro of Orlando, FL and their children Dominic, Adrienne and Dallan, Steven (Donna) Gasbarro of Appleton, WI., Michael (Leanne) Gianunzio of Milford and their daughter Mia; nieces Pattie (Kenneth Yoder) Pientkewic of Rothschild, WI and their children Kenny, Matthew and Brennan, and Carla Pientkewic of Kaukauna, WI.; and her children Logan Meyer and Ceara Pientkewic; and his faithful companion Buddy, his golden retriever. He was preceded in death by his parents and his sister Karen. Family will greet friends on Friday, January 26 from 4-5 p.m. at St. Barbara’s Church in Vulcan. A Memorial Mass will be celebrated on Friday at 5 p.m. at St. Barbara’s Church with Fr. Timothy Ekaitis presiding. Interment will be held in the spring at the Norway Township Cemetery.

The family of Michael Mathew Pientkewic created this Life Tributes page to make it easy to share your memories.

Send flowers to the Pientkewic family.