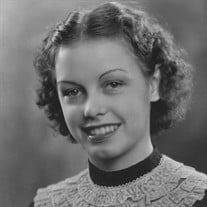 NORWAY- Mildred Helen “Lover” Spera age 103 of Norway, died Thursday, December 23, 2021 at ProMedica Nursing Facility in Kingsford, MI. She was born on August 30, 1918 in Norway, the daughter of the late D. Stephen and Lillian (Wilson) Benzie. Mildred graduated from Norway High School in 1936. She married Oswald Spera on October 5, 1937 in St. Mary’s Church in Norway. Together, the couple enjoyed dressing up and going out to local establishments to have a fun night out. Mildred worked for over 40 years at Holmberg General Agency, where she enjoyed interacting with customers. Mildred was a devoted wife, mother, grandmother, cousin, and friend. She had a passionate love for the arts, going to local concerts, plays and operas. She instilled her love of the arts with her children and grandchildren. Mildred enjoyed spending time with lifelong friends, going out to luncheons, attending social gatherings, and taking care of others. Mildred enjoyed her independence, traveling, bowling and golfing with friends. She was loved by so many and left a positive impact on those she knew. Mildred is survived by her son Stephen (Pat) Spera of Norway; three grandchildren Theresa (Julian Marsh) Spera, Anthony (Jennifer) Spera and Michelle (Barnie) Kontny; six great grandchildren Lindsay, Dominic, and Andrew Spera, Sophia, Isabelle and William Kontny; and daughter-in-law Mary Spera. She was preceded in death by her husband Oswald; son Joseph; sisters Edith Normand and Florence Bray and a special cousin Caroline DeDecker. In accordance with Mildred’s wishes, there will be no formal funeral services held. The family would like to give a sincere Thank You to the staff at ProMedica Nursing Facility that helped with her continued care.

The family of Mildred Spera created this Life Tributes page to make it easy to share your memories.

Send flowers to the Spera family.