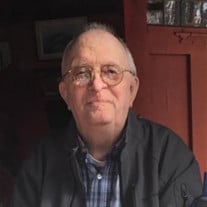 NORWAY- Milton R. Nyberg age 86 of Norway, went to his eternal home on Wednesday, January 11, 2017 at Manor Care in Kingsford, Michigan. Milton was born in Norway on June 27, 1930, the son of the late Harold G. and Nancy (Soderbeck) Nyberg. Milton graduated from Norway High School in 1949. He served his country in the U.S. Army Corps of Engineers in Korea from 1951-1953. Milt held several jobs during his working years: the Norway Sewing Factory, Khoury Furniture, the City of Norway, and the VA Medical Center (from which he retired from the food services department in 1993). He was an active member of the Evangelical Covenant Church of Norway and worked to maintain the church for many years. Always enjoying music, Milt also sang in the church choir. He fondly remembered playing guitar and mandolin in the church string band. Milt enjoyed nature and the beloved family camp, Maple Grove. In October, he was able to revisit the rustic camp and enjoyed a pasty and his first 4-wheeler ride. In his younger years he also enjoyed working in his flower garden. Milton was a kind, gentle man who loved his family. After his parents died, he was the caregiver for his younger brother. He will be greatly missed by his family and friends. He is survived by his sisters, Lenore Soderlund of Norway and Joyce Fredrickson of Santa Barbara, CA, nieces, Beth Henrion and Nancy Zelman, and nephews, Chuck Soderlund, Kurt Fredrickson and Brad Fredrickson. Milton was preceded in death by his parents, his brother, Donald, and brother-in-laws, Irving Bing Soderlund and Norm Fredrickson. The family wishes to thank his former caregivers from Hyland Nursing Home, Pinecrest Medical Facility, and Manor Care Nursing Home. His doctors, nurses, and caregivers were exemplary. A memorial service for Milton will be held in the spring. Memorial contributions can be made to the Evangelical Covenant Church Memorial Fund at 120 O’Dill Rd. Norway, MI 49870.

NORWAY- Milton R. Nyberg age 86 of Norway, went to his eternal home on Wednesday, January 11, 2017 at Manor Care in Kingsford, Michigan. Milton was born in Norway on June 27, 1930, the son of the late Harold G. and Nancy (Soderbeck) Nyberg.... View Obituary & Service Information

The family of Milton Rodney Nyberg created this Life Tributes page to make it easy to share your memories.

Send flowers to the Nyberg family.