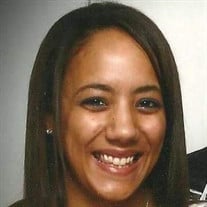 NORWAY- Natasha Ruth (White) Stark, age 32, went home with Jesus early morning, October 1, 2016. Natasha was born on December 18, 1983, in Marinette, Wisconsin, the daughter of Alfred (Al) and Irene (Piekutowski) White. She graduated from Escanaba High School in 2002. Her higher education included degrees from Bay de Noc Community College in Escanaba and Grand Valley State University in Allendale. She was currently working on a MBA with finance emphasis. She became a mom for the first time on January 5, 2011, when Gabriella Ruth came into her life. Gabriella was joined by Anthony “Tony” James on September 14, 2013. They were the love and joy of her life. Natasha only ever wanted to be a wife and a mom, and her children truly were her heart and soul. Natasha worked at various Taco Bells in Escanaba, Marquette and Grand Rapids area, and became General Manager of Taco Bell in Wyoming, Michigan, until the birth of Tony. She also worked as a food server at restaurants in Escanaba and then Grand Rapids while trying to care for her family and attain the degree that would help her care better for her and her children. She loved Jesus and was a member of Grace United Methodist Church in Norway.   Natasha is survived by children Gabriella and Tony, and husband Ryan and his family; mother Irene White of Norway; father Al (Patricia) White, Greenfield, WI; brother Nathaniel (Candace) White of Perronville, and his children Ashleigh and Tehya of Escanaba, Janessa, Athena, and Joshua of Whetstone, Arizona; sisters Amelia and her daughters Aurora and Elsa-Mae, and Katherine (Marlon) Willis, and her children Ryder and Carter of Norway; uncle Edward (Deb) Piekutowski of Moorhead, Minnesota, and his children Kevin, Brad (BJ), and Tracee; "grandparents" Nyle and Bess Nelson of Bark River; godparents Mary and Fred Weisse of Perkins, and Dave and Deb Peterson of Hyde; half brother James Alfred Bowens of Valdosta, Georgia; step siblings Sarah Craig, Jacquie Anderson, and Joseph Johnson of the Milwaukee area, and many extended "family" and friends. Natasha may be best known for her glitter. Like her mom, she loved sparkly things. Many Facebook tributes have been made speaking about her infectious smile and laughter. She was a good friend to many, and would always go out of her way to help people and boost their spirits. She was fun loving and brought joy to everyone. She enjoyed cooking delicious food, while singing, dancing, and acting silly. If you had the pleasure eating of any of her gourmet meals, you weren't just getting food, but dinner and a show. She will always be remembered as a warm, strong, fun-loving woman, who is leaving behind many broken hearts. She was preceded in death by her maternal grandparents Leo and Beatrice Piekutowski, paternal grandparents Nathaniel Sr. and Dosha White, and uncle Nathaniel White, Jr. Family will greet friends on Monday, October 10 from 1:00 p.m. to 3:00 p.m. at Grace United Methodist Church in Norway. A Funeral Service will be held on Monday at 3:00 p.m. at Grace United Methodist Church. A luncheon will be provided at the church following the service. A private burial will be held on Tuesday at St. Michaels Cemetery in Perronville.

The family of Natasha Ruth Stark created this Life Tributes page to make it easy to share your memories.

Send flowers to the Stark family.