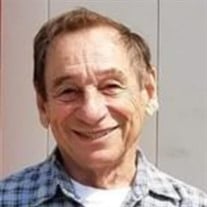 NORWAY- Patrick Homer Gendron age 86 of Norway, went home to his Lord and Savior Jesus Christ, Saturday, October 17, 2020. Pat was a father, husband, brother, brother-in-law, uncle, grandfather, great-grandfather, friend and much more to those who knew him. He was able to spend his final days, as he had wished, in his home surrounded with the love and the companionship of his family and beloved dog Rascal. He was born on November 16, 1933 in Norway, MI the son of the late Ignace Joseph “Patrick” Gendron and Stella (La Vigne) Gendron. Patrick married Ellen Lilmar Asbeck, the love of his life, on June 13, 1959 at Grace United Methodist Church in Vulcan, they shared 54 years together until her passing on April 4, 2014. Pat is best remembered by those closest to him as a kind, uncomplicated man who was easy to understand and love due to his gentle soul, easy going disposition and compassionate heart. He took joy in the simple things in life, having love and appreciation for animals and nature. He was an optimist who was always looking ahead; he felt some things are better left in the past and when asked, “looking back on your life, what was the “best” age?” he responded with a chuckle, “the age I will be tomorrow”. He was quick to flash you a huge smile and had a twinkle in his eyes as he would draw you in with his fantastic stories and sense of humor. His children and grandchildren can’t imagine a life without him and will miss most his no nonsense advice, undying love and companionship. He lived the life he loved and left the mortal world in the same quiet, gentle way, with an unwavering faith in Jesus Christ. Pat is survived by his loving family; son David (Angie) Gendron of Iron Mountain; daughter Kathleen (Barry) Winston of Cary, North Carolina; grandchildren Jolie and Kalyn Winston, Mariah (Derrick Waddell), Chase and Gabriel Gendron; Great-Grandson Cassel Reign Waddell. He will be greatly missed by his brothers, Gerald (Judy), George (Diann), William (Shirley), Ronald (Karen); sisters, Jean Proehl and Rosalind Schultz; sister-in-law, JoAnn Gendron; brothers-in-law, Frank (Mary) Asbeck of Texas and Donald (Cynthia) Asbeck of Alabama; as well as many nieces and nephews. Patrick was preceded in death by his wife, Ellen; brothers, Robert, Eugene, Donald, Richard; brothers-in-law, Bert Proehl and Leonard Schultz. In lieu of gifts or flowers, the family would be honored if a donation was made, in his name, at your local animal shelter. The family plans to hold a celebration of life, planned for spring/summer 2021, the family wants to ensure the safety of family and friends who wish to share their love and remembrances with them.

The family of Patrick Gendron created this Life Tributes page to make it easy to share your memories.

Send flowers to the Gendron family.