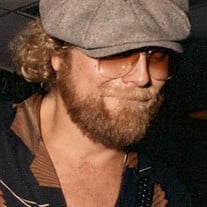 NIAGARA, WI- Patrick M. Grierson age 64 of Niagara, WI. died unexpectedly, Wednesday, August 26, 2015 in Ann Arbor, MI. He was born on July 31, 1951 the son of the late Thomas and Inez (Freeman) Grierson. From a young age, Pat was instructed by Ray Amicangelo of Iron Mountain, his accordion teacher, who found him to be extremely talented. Pat never lost interest in music and thru the years learned to play many other instruments, playing and singing in many bands, including Morrison & Co., a popular band in the ‘70’s. He worked for the Niagara Paper Mill for 38 years as a tin smith, where much of the time he was a union officer. Pat was a very talented artist as well. He brought a lot of laughs to his co-workers thru his artistic talent, drawing caricatures and playing practical jokes on them. After retiring, Pat gave music lessons at Jim’s Music, sharing his many gifts to kids who grew to love him. Pat gave his time playing in many benefits over the years as well. His partner of 26 years, Barbara Nora, also shared in his music, as they played and sang together many times. Barb’s family meant everything to Pat. He spent a lot of time with Barb’s mother, her kids and their spouses, her four grandchildren and great granddaughter. Pat knew a lot of people. It was a family joke that everywhere he went, he ran into someone who knew him. Pat had a very generous nature. He used his talent making camp signs, license plates and even creating logos for friends businesses when they asked. Even after his death he donated his organs, to help someone that needed them. He will be sadly missed by all who loved him, which are many. Pat is survived by his partner Barbara Nora of Kingsford; brother Gary “Twigs” Grierson of Green Bay, WI; Barb’s children Jeff (Michelle) Muraro, Debra (Ross) Rossato and four grandsons Dante and Adrian Muraro, Jack and Dominic Rossato; and his new great granddaughter Nova Rossato; aunts, an uncle and many friends. He was preceded in death by his brothers Alan and Timothy Grierson. Family will greet friends on Thursday, September 3 from 3-6 p.m. at the Ortman Funeral Home in Norway, with a get together to follow at the Knight Owl in Norway. Interment will be held at Cemetery Park.

The family of Patrick Michael Grierson created this Life Tributes page to make it easy to share your memories.

Send flowers to the Grierson family.